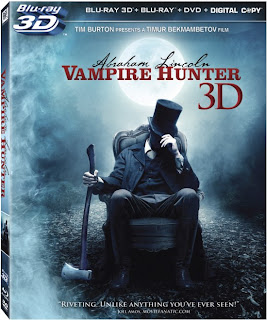 Just in time for Halloween, Marc and I had movie night the other day.. Yes... you read that right, the other DAY.  It just works best for us that way! Marc really likes the whole vampire/zombie themed movies, but me?  Not so much... I did choose to review this, but I was doubtful that I would like it... Did I?  Nope.  I just thought it was way to weird... But Marc thought it was a great movie... and it was sort of neat that a friend of his and his son were extras in the movie... (I think Marc also liked it because it was filmed on some plantation in New Orleans that he was familiar with.)  The movie starts off with Abraham Lincoln as a young boy... A boy that sees a vampire kill his mom.  Of course, that sends him on a personal mission to hunt down and kill the vampire that took his mom from him... I will admit, I was interested in seeing the movie to see what the point was that had Abraham Lincoln be a vampire hunter... It was "different" to say the least...   Mar
6 comments
Read more

Great Food You Can "Make" At Home With @ZoesKitchen

Oh My Goodness. The other day, we ventured out to try Zoës Kitchen in East Cobb (Georgia) for a blog review. It was pretty funny, as I have never heard about it... but then recently I have heard several people talking about it and I have seen a couple facebook "check ins."  Everyone keeps talking about their "white beans" but we did not try that out...   Image Credit: Zoes Kitchen The plan was to go and check out their "take home tubs." Basically, they have a couple of their food items packaged in take home tubs and then they have a couple of menu cards for you to recreate dishes... Since Zoës Kitchen  isn't particularly near us, we decided to go and check them out for lunch... and then try their take homes that night.. Marc had their steak sandwich with rice... He was a bit turned off that it was "healthy food" and was really unsure about the whole "no mayo potato salad" so he would not even try that... I asked the ca
7 comments
Read more