Learning to be Curious - #MeetDennis 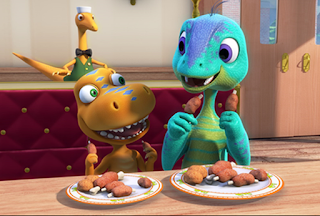 April is Autism Awareness month and I wanted to share this with you. Make sure you tune in April 6th to watch Dinosaur Train and #MeetDennis!   LEARNING TO BE CURIOUS Lessons from The Jim Henson Company’s Dinosaur Train on PBS KIDS by Stephanie E. Meyer, Ph.D. The Dinosaur Train creative team contacted me to be an advisor when they were developing a new character who would serve as a challenge for Buddy the T-Rex in their new episode “Junior Conductor Academy” (check your local listings). Buddy, whom they described as a “super nice, positive guy,” was going to have to adjust to being put “out of his comfort zone by another kid named Dennis who beats him at every turn.” “Oh, and we’re thinking that maybe Dennis has autism.” they said. I loved the idea that Dennis’ autism was beside the point. As a child psychologist, the most exciting part to me is that the episode isn’t about Dennis having special needs, in fact, it’s an episode about  friendship, understanding, and accept
3 comments
Read more

April 01, 2016
April is Autism Awareness Month...  Just thought I would share this with you all.  **TUNE-IN** Dinosaur Train     Meet Dennis in the All-New Episode “Junior Conductors Academy” on  Wednesday, April 6  As Part of Autism Awareness Month April is Autism Awareness Month and The Jim Henson Company is embarking in a brand-new episode “Junior Conductors Academy” in which Buddy and his siblings become friends with a dinosaur who knows a LOT MORE about dinosaurs than Buddy, but has some trouble making friends. Like all dinosaurs, their new friend Dennis Deinocheirushas his own dinosaur features. And, like all of us, he has strengths in some areas and challenges in others.  PBS stations across the country are hosting screenings and events for this special episode and  Dinosaur Train  has teamed up with the Centers for Disease Control and Prevention’s “Learn the Signs. Act Early.” initiative, aiming to  improve early identification of children with autism and other developmental
2 comments
Read more

Do you like to work in the Yard? @PikeNurseries has a giveaway for you!

Received this email and thought I would share.  I would LOVE to have a gift certificate to go and do some damage at Pike Nurseries!!!!   We have a yard that once had lots of trees.  We have been trying to clean out the "jungle" as I call it and I have told Marc time and time again that I think planting a ton of Azaleas would be perfect in the area that is no longer such a jungle. Growing up, I remember my yard had a fence full of Azaleas and I want to try and recreate that for my children to enjoy. (Makes a great backdrop for photos too!) Do you enjoy working in the yard?  ATLANTA (March 29, 2016) –  Just in time for the prime gardening season,  Pike   Nurseries  is debuting a new, eye-catching plant variety that will set any landscape ablaze with vibrant color and interest all year long. Starting  Friday, April 1 , all garden center locations will carry  Autumn Fire™ , the newest variety of high-performing shrubs from Encore® Azalea.      Known as a hallmark favor
2 comments
Read more

Friday or Saturday? Have a nice weekend! @Ihop 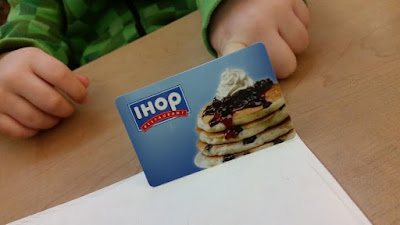 FTC Compliant Review Policy: The product(s) featured in this review were provided free of cost to me by the manufacturer or representing PR agency for the sole purpose of product testing. Opinions expressed are my own and are NOT influenced by monetary compensation . I don't know about your house, but around here... we don't get to sleep in EVER. Broxton has his whole routine down and I am lucky that he is so easy to get up in the morning for school,but come the weekend, I wish he could find a way to take a bit longer to sleep and rest.  Oh well, teenage years will be here faster than I want and we know that probably means a change in his sleep.  Why am I telling you this? Well, since we still get up early on weekends, I decided to have a bit of fun with it. He was up enjoying his morning and I ran out into the room he was in... I told him we were wrong, it was in fact FRIDAY, NOT SATURDAY and he was late for school. Yeah, he told me I was crazy and it was Saturday, but I
1 comment
Read more

Do you Ugga Mugga? 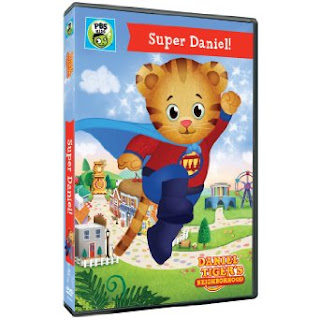 FTC Compliant Review Policy: The product(s) featured in this review were provided free of cost to me by the manufacturer or representing PR agency for the sole purpose of product testing. Opinions expressed are my own and are NOT influenced by monetary compensation. *** POST CONTAINS AFFILIATE LINKS *** When Broxton was younger, we loved Daniel Tiger's Neighborhood. I loved Mister Rogers as a child, so I know the hint of nostalgia was a big reason we started watching.  Even now, we still "ugga mugga" at times (if you don't know about ugga mugga, you need to watch an episode!) and it always makes my heart happy.  I am so excited that they have new DVD's coming out, so we can fall in love all over again watching with Savannah! Super Daniel - Feb 2, 2016  “ SUPER DANIEL!”  will be available on DVD starting February 2, 2016. The DVD has a run time of approximately 110 minutes and an SRP of $12.99. The “ SUPER DANIEL! ” DVD includes the stories below. “
2 comments
Read more 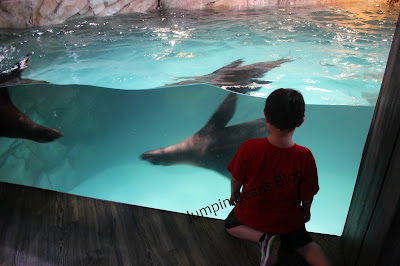 FTC Compliant Review Policy: The product(s) featured in this review were provided free of cost to me by the manufacturer or representing PR agency for the sole purpose of product testing. Opinions expressed are my own and are NOT influenced by monetary compensation. As soon as we entered the Aquarium, Broxton was trying to take it all in. To me, I was taken back to my trip to California when I saw all the Sea Lions.  Have you ever been and seen them just laying there in the sun?  So neat.  Broxton had to get all up on the glass to be able to see what all was going on.  I love this kids enthusiasm!   These little otters were just the cutest.  It was fun watching them play around with one another.  One kept pushing the other in the water and then would run off.  Just like little kids!   There is something about taking pictures like this.  I could stay here for hours, but Broxton was ready to see what was around the corner.  This could have been Broxton's favorite
4 comments
Read more
More posts