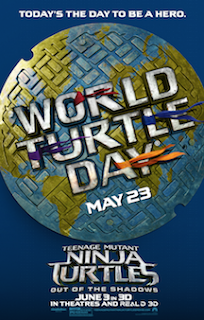 If you have known me for a while, you might know I love turtles.  Turtles and Frogs, although I will not touch a real one.  I just love to look at them.   So, having said that... When I heard it was "WORLD TURTLE DAY" I just had to share.  This is not a sponsored post, just something fun.   We can all use more people around like those Ninja Turtles!  (Let's all work to STOP Bullying!)   TEENAGE MUTANT NINJA TURTLES: OUT OF THE SHADOWS  is in-theaters  June 3, 2016 ! #TMNT2 Michelangelo, Donatello, Leonardo, and Raphael return to theaters this summer to battle bigger, badder villains, alongside April O’Neil (Megan Fox), Vern Fenwick (Will Arnett), and a newcomer: the hockey-masked vigilante Casey Jones (Stephen Amell). After supervillain Shredder (Brian Tee) escapes custody, he joins forces with mad scientist Baxter Stockman (Tyler Perry) and two dimwitted henchmen, Bebop (Gary Anthony Williams)
4 comments
Read more 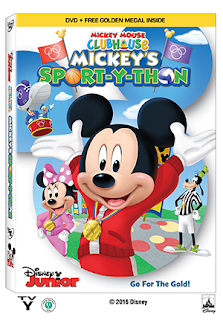 It's the Mickey Mouse Clubhouse, Come Inside, It's fun inside!  Chances are, if you have a younger child you might be familiar with this song.  When Broxton was younger, we got into watching it from time to time. (Hello, we all LOVE Mickey and his friends!)  I have had it on a couple times for background noise and whenever Savannah hears it, she normally has to stop what she's doing to watch a little bit of it.  Now, I have a DVD to play for her if she's looking for it when it is not on TV. I love that this one is Mickey's Sport-y-thon.  Let's get them out there and active!!!! FTC Compliant Review Policy:  The product(s) featured in this review were provided free of cost to me by the manufacturer or representing PR agency for the sole purpose of product testing. Opinions expressed are my own and are NOT influenced by monetary compensation. Synopsis : Put on your sneakers and get ready for the greatest sporting event ever! Join referee Goofy, along with
4 comments
Read more
More posts