Day Out With Thomas in #Chattanooga (Part Two) 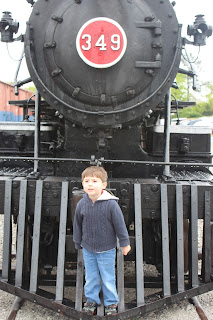 ***** ALL PHOTOS ON THIS POST BELONG TO JUMPIN BEANS BLOG.  (UNLESS OTHERWISE NOTED)  DO NOT USE ANY PHOTO ON HERE WITHOUT WRITTEN PERMISSION FROM BLOG OWNER.  ***** FTC Compliant Review Policy: The product(s) featured in this review were provided free of cost to me by the manufacturer or representing PR agency for the sole purpose of product testing. Opinions expressed are my own and are NOT influenced by monetary compensation. You made it back! I told you yesterday that I would be sharing more pictures from our Day Out With Thomas ... We really had a great time and I loved that there were so many photo opportunities that we not just Thomas related. Broxton was able to get a picture in front of an old train: Of course we had to get the Picture in front of Thomas: Daddy and Broxton with Thomas...   Mommy and Broxton in front of Thomas : I think he was over the "say cheese" moment.   Then, I took a few other photo's of the area: Tennessee Valle
3 comments
Read more 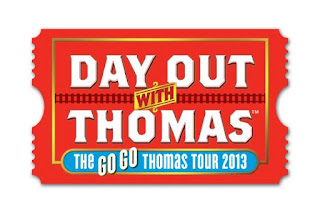 ***** ALL PHOTOS ON THIS POST BELONG TO JUMPIN BEANS BLOG.  (UNLESS OTHERWISE NOTED)  DO NOT USE ANY PHOTO ON HERE WITHOUT WRITTEN PERMISSION FROM BLOG OWNER.  ***** FTC Compliant Review Policy: The product(s) featured in this review were provided free of cost to me by the manufacturer or representing PR agency for the sole purpose of product testing. Opinions expressed are my own and are NOT influenced by monetary compensation. IMAGE CREDIT: DOWT For the past couple of years, we have been lucky enough to take Broxton to the " Day Out With Thomas " event closer to back home.  It has always been with my parents and for the first two years, they really seemed to enjoy it.. but last year, they seemed like they had sort of outgrown it.   The whole purpose of us going to South Georgia was to see them, so I told them this year they weren't "on the hook" to go and that I would take Broxton to the one up closer to us.   I am SO GLAD I did.   We actually
1 comment
Read more

I am so excited to tell you what is going on here... We have the boys up visiting for Summer Break and of course, with a house of boys... It is always GO GO GO ...    The youngest of them is 12 and he is really into football.  As in he has played for different football teams since he was in second grade. He loves it and not only shows a passion for it, but he is really good at it. He actually had a coach that used to play in the NFL and he even had to talk about how he was such a good player! That being said...   I love opening up emails and finding surprises. I opened an email and saw that there was a football camp being held by a couple NFL players... I KNEW that I would want to take the boys to it.  If only one was able, I knew I wanted it to be the youngest, Marc!!!  Nothing against Caleb, but he is more into basketball.  Luckily, they are both able to go!!!! Here are the details: NFL Summer Football Camp for Andre Fluellen (Chicago Bears) & Ronnie Brown (San Diego Ch
3 comments
Read more
More posts