Showing posts from February 9, 2014
Show all

History of the World with Google Earth 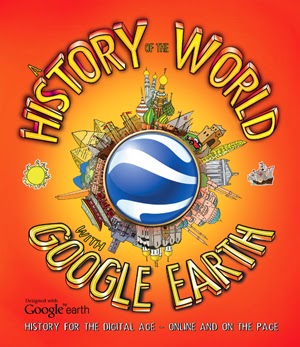 The product(s) featured in this review were provided free of cost to me by the manufacturer or representing PR agency for the sole purpose of product testing. Opinions expressed are my own and are NOT influenced by monetary compensation. Normally I get excited about the different books Broxton gets to review, but this time... I am totally stoked to get to review this book... and maybe a bit more for me than for him.  I know, I know, I am just telling the truth!!! We were recently sent the book, History of the World with Google Earth and I am so excited to dive into this book!  I was all giddy with excitement when I read the opening pages...  History of the World with Google Earth.   To be honest, from time to time, I like to " go on vacation" and I will sit online and google different images and information about different area's that I would love to visit one day.   I mean, how much money am I saving as I jet set all over the world through the internet
7 comments
Read more 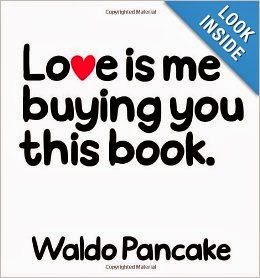 The product(s) featured in this review were provided free of cost to me by the manufacturer or representing PR agency for the sole purpose of product testing. Opinions expressed are my own and are NOT influenced by monetary compensation. If you are looking for a way to say " I LOVE YOU" for the one that has everything, you can always make a quick run to grab this book- Love is me buying you this book by Waldo Pancake.  I gave it to Marc (as an early gift) and he looked at me like I was crazy...  Of course, he did not flip through it, but instead I held up a few pages and make him look at me while I made silly faces...   For sure this is a book for those with a sense of humor and that don't fall into the whole mushy-mushyness of Valentines day... Image from - AMAZON Love Is Me Buying You This  Book  is the hilarious new collection of ways to tell your special someone you love them, from acclaimed visual and print artist  Waldo Pancake. Affectionate yet witty,
2 comments
Read more

Who's in the Tree? (He sure doesn't belong!) 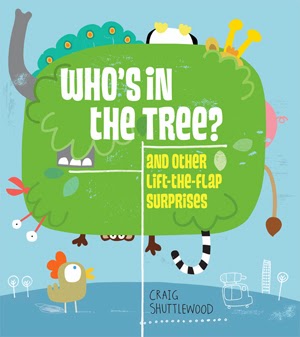 The product(s) featured in this review were provided free of cost to me by the manufacturer or representing PR agency for the sole purpose of product testing. Opinions expressed are my own and are NOT influenced by monetary compensation. I am a fan of (some of)  the lift the flap books since kids seem to really enjoy them...   With the latest one we were sent, I loved the whole thing... It is totally different, in that the things hiding behind the flaps are not what you would expect... but then as you turn each page, the previous hidden character is now tucked into the corner of the page... As we go through the book, we meet several characters and then at the end, there is a "summary" of sorts to make sure that the reader was able to correctly name all the different characters!   Who's in the Tree by Craig Shuttlewood. An elephant in the sky? A peacock in the sea? Are creatures hiding where they shouldn't be? Lift the large flaps, follow the romping r
2 comments
Read more 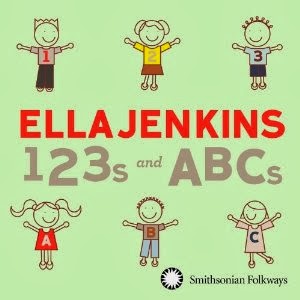 The product(s) featured in this review were provided free of cost to me by the manufacturer or representing PR agency for the sole purpose of product testing. Opinions expressed are my own and are NOT influenced by monetary compensation. Having a preschool aged little one, we get to listen to a wide variety of music...  Some is enjoyable, while others make you hope the batteries run out on the cd player...  We were sent the " 123s and ABCs" cd from Ella Jenkins and Broxton was having a great time listening to it on the way to school.   The songs on the cd: Easy as ABC Johnny Had One Friend One, Two, Three, Four, Five One, Two Buckle My Shoe One Potato, Two Potato Eight Clay Pigeons Counting from One to Ten in Spanish Counting in Swahili One, Two, Three O'Leary Numbers and Alphabets ABC's And One and Two Ten Green Bottles Farmer Brown had ten Green Apples The Rabbi teaches ABCs / English ABC Song This Old Man Out of all of them, we seem to both like the Farme
2 comments
Read more 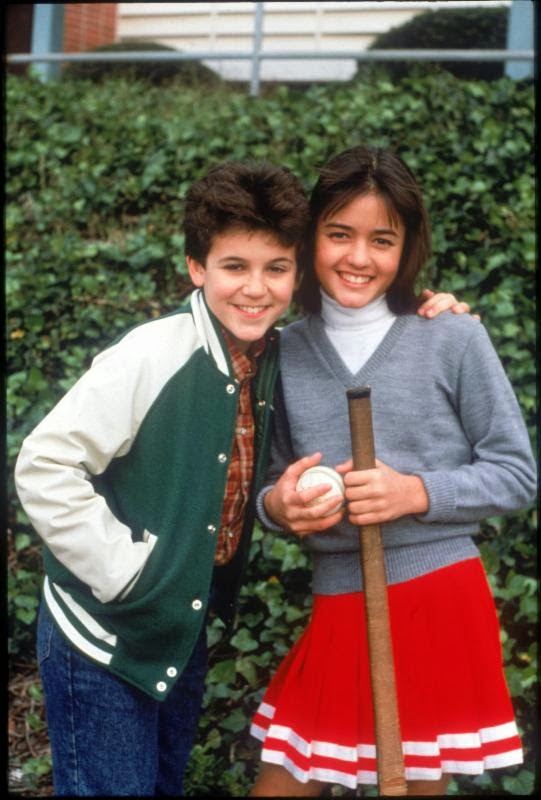 *** NOT A SPONSORED POST - but I am THRILLED like you just do not know... So, I had to share with you!!! *** Honestly, I am SO EXCITED about this... I actually signed a petition at some point to have the Wonder Years on DVD, so this makes me so happy... Oh and yeah... I bought the entire show on DVD -  just to get it and see that it was a crappy recorded version...  Anyways- this makes me happy!!!! In 2014, StarVista Entertainment/Time Life -- the premiere marketer of classic TV on DVD -- will release  THE WONDER YEARS: THE COMPLETE SERIES  to the home entertainment marketplace.  The most requested TV series never to be released on DVD, which ran on ABC from 1988-1993, garnered multiple Emmy® Awards, a Golden Globe® and a Peabody®, and was named by  TV Guide  as one of the "Top 20 Shows of the '80s" will make its very long-awaited debut in the second half of 2014.  To best serve the numerous fans of the program, StarVista Entertainment/Time Life has launched
3 comments
Read more 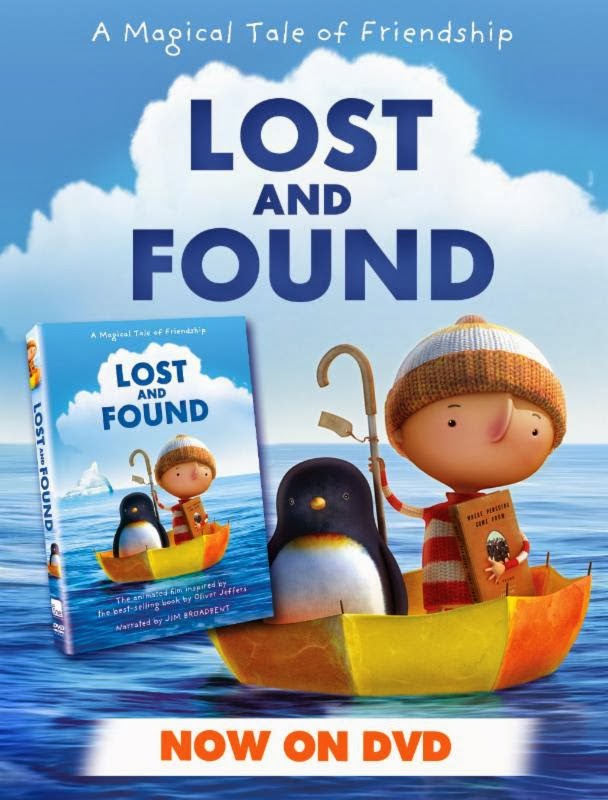 The product(s) featured in this review were provided free of cost to me by the manufacturer or representing PR agency for the sole purpose of product testing. Opinions expressed are my own and are NOT influenced by monetary compensation.   Lost and Found is really a " magical tale of friendship" and we really enjoyed it.   I decided that it was a great time to settle down and try and enjoy a slower paced show for a bit.  That is exactly what we did!  I really did not know what Lost and Found was about, but decided to check it out...   This is a cute DVD about a little boy that find a friend in a lone penguin.   The cool part to me was that it was " Originally inspired by the real-life story of a little boy in Belfast, Ireland, who somehow managed to sneak a penguin out of the zoo during a class trip  and  all the way home to his bathtub before anyone noticed,  LOST   AND   FOUND  tells the unforgettable story of a little boy who one day finds a penguin on
1 comment
Read more

February 12, 2014
The product(s) featured in this review were provided free of cost to me by the manufacturer or representing PR agency for the sole purpose of product testing. Opinions expressed are my own and are NOT influenced by monetary compensation. For those in or near Atlanta - you know the nasty weather we are dealing with right now...  I wanted to share with you the latest information for those that might have had tickets to the opening night of the circus.   ATLANTA –  Feb. 12, 2014  – Due to inclement weather, the  Wednesday, February 12, 7:30 p.m.  performance of  Ringling  Bros. and Barnum & Bailey   presents “Built To Amaze!”  at Philips Arena has been cancelled. Ticket holders for the February 12 th  performance can exchange their tickets at the Philips Arena box office, One Philips Drive, Atlanta, 30303, for one of the following performances: Show  Times: Thursday, Feb.13, 2014 at 7:30 p.m. Friday, Feb. 14, 2014 at 10:30 a.m. and 7:30 p. m. Saturday, Feb. 15, 2014 at
2 comments
Read more

Is that my cat? 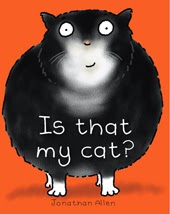 The product(s) featured in this review were provided free of cost to me by the manufacturer or representing PR agency for the sole purpose of product testing. Opinions expressed are my own and are NOT influenced by monetary compensation. Although I am not really a "cat fan,"  I did think that Is that my cat was a very cute little book for young ones.  The illustrations and story line were very simple, but eye catching too!  I think that this would be a great book for young readers, as the words "is that my cat" are used several times throughout the book.  Adding for needed repetition to teach reading.   As I said, the illustrations were simple too, it was cute for the story, but not so much as to distract.  The story was cute and it ended differently than I expected!  (No, I am NOT going to tell you, you have to read it!) Is that my cat?  by Jonathan Allen “Is that my cat? It can't be. My cat is a slim, sleek pussy cat.” But something's up
2 comments
Read more 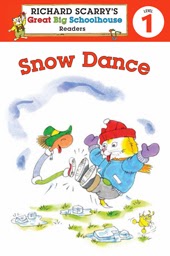 The product(s) featured in this review were provided free of cost to me by the manufacturer or representing PR agency for the sole purpose of product testing. Opinions expressed are my own and are NOT influenced by monetary compensation. As the weather here is getting nasty, I am so excited to get to break out a few new books for Broxton to enjoy!!!  Just today we were able to read two books from Richard Scarry and Sterling Publishing.  Broxton isn't really familiar with the characters, as he has never seen the show... But, he did have a couple toys that he used to play that was based upon them.  He enjoyed them and it was great that he wants SNOW and one was about the kids wanting snow too!!! I really liked the books, as they were "Great Big Schoolhouse Readers" and perfect to add to our growing library.  Seeing as he is about to turn 5, we are starting to learn about these different "level" books.  We were sent a Level 1 and a Level 2 book for review.
4 comments
Read more
More posts