Healthy Foods from A to Z 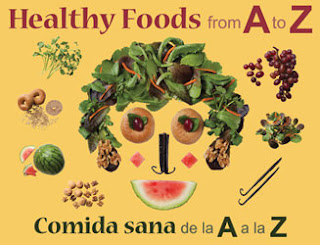 I will admit, I was a bit interested to see what would be inside the book, Healthy Foods from A to Z and I tell you what, I was not disappointed!
This book is full of color and I have enjoyed looking at it!

This book does more than grabs the attention of the reader...
It shows everyone what "healthy foods" are out there..
but there is so much more...
It is a bilingual book!  I really liked that part, as we can look at it and not only discuss the food in the picture, but we can also work on our ABC's... and learn another language too!

That was also the one thing that bothered me...
I loved learning, but then I think for younger children, it could be confusing...
You see, on one side of the picture, you have the English words (with Spanish Below)
Then, on the opposite side, you have the Spanish words (with English below)
Let's grab the letter N, for Noelle

Now, I think it is cool and educational on so many levels..
But, For broxton's age, I think that it might confuse him as to YAM being with the N even though it does start with N in Spanish...

Broxton has been cracking up at the book, since each page has a smiley face made out of the foods that they teach us about... He honestly could care less about the alphabet issue that is bother me...
Case in point..
I have him tell me the letter on the page, then we discuss the food items that make up the smiley...
He has no worry that the Nabo is actually a turnip, so see, it probably is just me!

If you want to learn about more "healthy foods", learn the Spanish translation, or maybe you just need a smile to brighten your day...

Check out the Healthy Foods from A to Z book!
YOU will catch yourself smiling as well!

FTC Compliant Review Policy: The product(s) featured in this review were provided free of cost to me by the manufacturer or representing PR agency for the sole purpose of product testing. Opinions expressed are my own and are NOT influenced by monetary compensation.
book book review education food Healthy Food kids book Review