October 09, 2013
FTC Compliant Review Policy:
The product(s) featured in this review were provided free of cost to me by the manufacturer or representing PR agency for the sole purpose of product testing. Opinions expressed are my own and are NOT influenced by monetary compensation.

Broxton enjoys watching Phineas and Ferb, when it is on....  and we all know how much he just loves the Marvel Super Heroes.   I saw that they were going to have the super heroes mixed in with Phineas and Ferb... but we were not able to watch it...  When I saw that it was going to be available on DVD, I knew that was going to make Broxton pretty excited.
As soon as he saw the cover, he had to ask to watch it... and he really seemed to enjoy it.  I just wish it would have been several shows with those characters, not just the one that was on there...  This DVD had the Marvel characters and Phineas and Ferb... but then there were a couple other Phineas and Ferb episodes, so I felt like the kids would be happy.  (At least it wasn't just one episode and then that be it!) 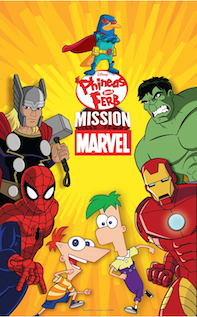 Synopsis:
After Dr. Doofenshmirtz’s latest "-inator" scheme accidentally removes the powers of some very well-known Marvel Super Heroes (Spider-Man, Iron Man, Thor, and Hulk), the heroes enter the world of Danville and team up with Phineas and Ferb to relocate their powers, defeat the Marvel Super Villains (Red Skull, MODOK, Whiplash and Venom) - who have also shown up to steal Doofenshmirtz’s power-draining technology - and save Danville from ultimate destruction! 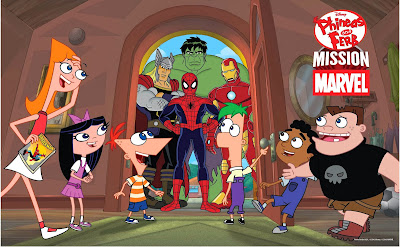