Have you seen The Nutcracker and The Four Realms? #review

February 28, 2019
I will admit, I hear about different movies being good and I just get excited to see it... I don't even really pay attention to what the whole thing is about, just that people talk it up and I want to be part of it.  I know that sounds kinda sad, but when I pay too much attention, I get disappointed with it, but if I just sort of know a little, it leaves so much to be determined by me!  When people started talking about The Nutcracker and The Four Realms, I knew it looked like a good movie, but I was still up for whatever might come my way.  I thought the movie was great, Savannah liked it a little, but Broxton was not impressed at all.  Now, it makes me want to see The  Original Nutcracker.   Have you seen either one? 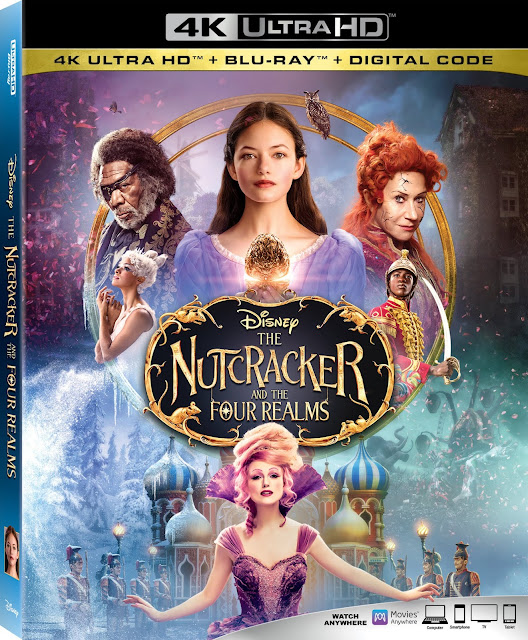 ABOUT “THE NUTCRACKER AND THE FOUR REALMS” CAST AND CREW:In the coming-of-age tale, “The Nutcracker and the Four Realms,” Keira Knightley stars as the Sugar Plum Fairy and Mackenzie Foy portrays Clara. Helen Mirren brings much-feared Mother Ginger to life, and Morgan Freeman stars as Clara’s eccentric godfather, Drosselmeyer. Eugenio Derbez and Richard E. Grant play Hawthorne and Shiver, the regents of the Land of Flowers and Land of Snowflakes. Jayden Fowora-Knight was cast as Phillip Hoffman, the Nutcracker soldier come-to-life. Matthew Macfadyen, Ellie Bamber and Thomas Sweet were called on to play Clara’s father Mr. Stahlbaum, sister Louise, and brother Fritz, respectively. Omid Djalili and Jack Whitehall portray palace guards Cavalier and Harlequin, and the film features a special performance by ballet greats Misty Copeland and Sergei Polunin. Filmed in England at Pinewood Studios and various locations in and around London, “The Nutcracker and the Four Realms” is directed by Lasse Hallström and Joe Johnston. Suggested by the short story “The Nutcracker and the Mouse King” written by E.T.A. Hoffmann, and “The “Nutcracker” ballet written by Marius Petipa, the screen story and screenplay are by Ashleigh Powell. The film is produced by Mark Gordon and Larry Franco, and executive produced by Sara Smith and Lindy Goldstein. Linus Sandgren, F.S.F., is the director of photography, Guy Hendrix Dyas serves as production designer and Stuart Levy, ACE, is the film editor. Jenny Beavan and Jenny Shircore are the costume designer and makeup and hair designer, respectively. Max Wood and Marc Weigert are the visual effects supervisor and visual effects producer, respectively. Music is by James Howard with a score conducted by Gustavo Dudamel, featuring piano soloist Lang Lang.

BLU-RAY:
ON DIGITAL:
movie movie night Review the nutcracker and the four realms