July 25, 2020
Have you ever heard of alfajores? It was new to me when I received an email introducing them to me...     but I am glad I gave it a try!  We were sent several to try... along with Dulce De Leche.  YUM!!!!!
Alfajores: (From Wikipedia)
An alfajor or alajú is a traditional confection found in Argentina, Chile, Uruguay, Paraguay, Colombia, Peru, Bolivia, Ecuador, Andorra, Spain, Venezuela, Southern France, Southern Brazil and the Philippines. The archetypal alfajor entered Iberia during the period of al-Andalus. It is produced in the form of a small cylinder and is sold either individually or in boxes containing several pieces.
Dulce De Leche : (from Wikipedia)
Dulce de leche is a confection from Latin America prepared by slowly heating sweetened milk to create a substance that derives its flavor from the Maillard reaction, also changing color. Dulce de leche is Spanish for "candy of milk" 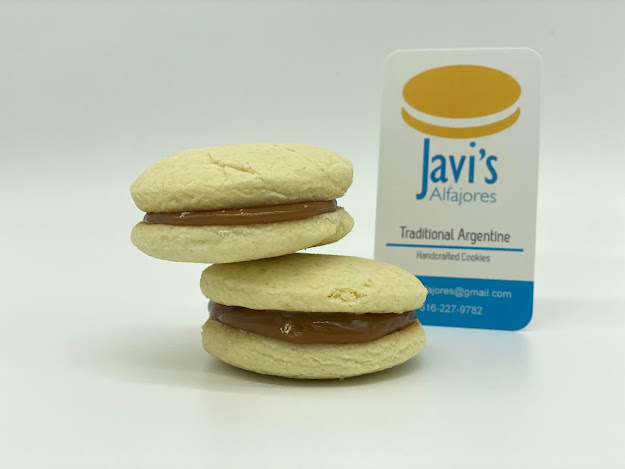 FTC Compliant Review Policy:  The product(s) featured in this review were provided free of cost to me by the manufacturer or representing PR agency for the sole purpose of product testing. Opinions expressed are my own and are NOT influenced by monetary compensation.
Javi's Alfajores are available online or at the Woodstock Farmers Market, if you are lucky enough to live near there!  Like I said... we were sent these delicious treats.  The kids and I loved them, but I wanted to share with my friends at work. Lucky for us, these cookies are individually wrapped, so great for sharing.
We tried to describe them, but all I could say was yum!  One said they had a pumpkin taste, another said lemon...  all said they were reminiscent of biscuits... and we all agreed they were oh so good!  The Dulce De Leche has not been shared.  This is great to add to coffee, top off ice cream and so much more!
Have you ever tried these?   Are you a fan of sweets?
Make sure you check out Javi's Alfajores- they even have candles!
#BringingHomeBaby #CBias food Review