Having a Blast with Angry Birds Go!!!!

January 04, 2014
FTC Compliant Review Policy:
The product(s) featured in this review were provided free of cost to me by the manufacturer or representing PR agency for the sole purpose of product testing. Opinions expressed are my own and are NOT influenced by monetary compensation.

Back in October, I was able to review the Angry Bird Telepods for you guys...
Broxton saw them online and was determined that he really NEEDED them and that he just had to have it. We were lucky to be able to review them and since then, we have slowly added to our collection of angry bird items.  To be honest, we have about 5 of the sets now and he loves adding and mixing to make the scenes for the birds to destroy... and those crazy piggies... Oh my... they are always doing something!!!! 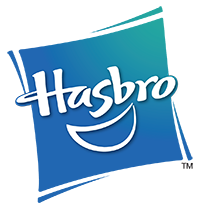 I thought we were all set for Christmas gifts... until he spotted the Angry Birds Go! 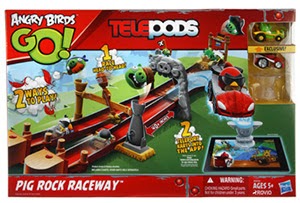 ANGRY BIRDS™ GO! TELEPODS™ PIG ROCK RACEWAY™ Set
(Age: 5+; Approximate Retail Price: $29.99; Available: Now)Race head-to-head to topple the pirate pigs! Slingshot your kart through swinging obstacles and avoid the pigs to be the first to the finish line. Continue the racing action on your mobile device by using the included TELEPODS base to teleport your kart into the new ANGRY BIRDS™ GO! app. Set includes two karts featuring favorite ANGRY BIRDS™ characters, one of which is exclusive to this set. 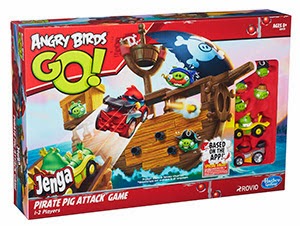 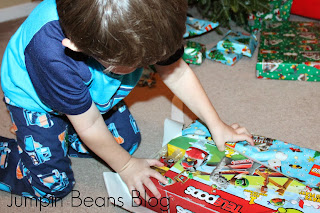 Lucky for us, Santa must have heard Broxton's wishes... As he was able to unwrap one on Christmas morning!!!   He was so excited and I tell you, making that boy smile, well... it just melts my heart!!!
With the Angry Birds Go! Telepods, you get to have the angry birds on vehicles and the set includes a race track for even more speedy fun!!! 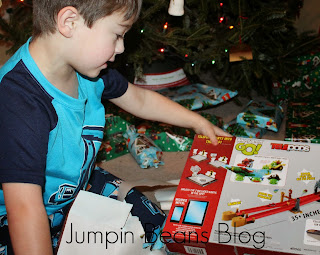 If a tablet was a wish granted this Christmas - or even a smart phone- you need to check out Angry Birds Telepods... It is the neatest thing, that the camera reads the code and teleports the physical toy that is being played with into a digital adventure online!!!!
Broxton loves playing with his toys... and is always looking to add to his Telepod collection!!!
If you don't have a tablet / smart phone... you can just purchase the Angry Birds games, but no need to worry about the telepods....  Either way, you are sure to have a great time playing such a fun game!!!!
Angry Birds digital games Gift Guide hasbro online Review telepods