Laugh Out Loud With Modern Family

September 22, 2012
I love the whole TV on DVD (* or blu ray now) that is getting very popular in our house.... I have never really followed Modern Family. I believe it was because it was against another show I watched or something... Not really sure.. but the times I do watch it, I am busting out laughing throughout the show! I remember when it first came on, like first season "first" not recent... I was laughing and telling EVERYONE that they just had to watch it.. The cast is hysterical and the story line is one of a kind... So, when I had the chance to catch up on what I missed, I knew I was going to be SO HAPPY reviewing Modern Family Season 3. It is just that funny... Not to mention pretty much all of my friends watch and love it too, so we can chat about it... 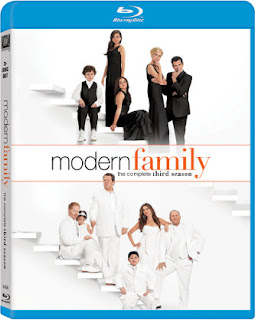 Join TV’s #1 family for another hilarious and refreshingly original season of Modern Family, winner of eleven Emmy® Awards, including Outstanding Comedy Series two years in a row! As the extended Pritchett/Dunphy clan faces an uproariously unpredictable array of family vacations, holiday hassles, troublesome in-laws, and surprising secrets, they still somehow manage to thrive together as one big, loving family — even as they drive each other absolutely insane! Season Three features a hilarious gag reel and never-before-seen couch confessions that will make you laugh out loud and remind you why viewers and critics alike have fallen in love with this thoroughly Modern Family.

Do you watch Modern Family?


Who cracks you up the most? Sofia Vergara and Jesse Tyler Ferguson are the two that get me laughing!

FTC Compliant Review Policy: The product(s) featured in this review were provided free of cost to me by the manufacturer or representing PR agency for the sole purpose of product testing. Opinions expressed are my own and are NOT influenced by monetary compensation.
Modern Family Review sitcom TV on DVD