Heart of the Country

August 16, 2013
This is not a paid or sponsored post... I just enjoyed Jana Kramer on One Tree Hill and thought it would be nice to share for any of her fans...  (She is also a country music singer now!) 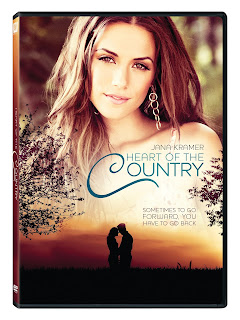 Based on the novel by Rene Gutteridge and John Ward, Heart of the Country is a love story starring country music singer Jana Kramer (“One Tree Hill”), Randy Wayne (“True Blood”), and Gerald McRaney (“Major Dad”). Faith (Kramer) and Luke (Wayne) have it all. Faith is a beautiful singer and Luke is an up-and- coming businessman. When their life together is shattered and she is forced to return home to the family she turned her back on years ago she must find the strength to love again. Watch Jana Kramer in her first leading movie role in the year's most inspirational and romantic movie event when it debuts on DVD from Twentieth Century Fox Home Entertainment on August 20.
Rising star Jana Kramer is one to watch on and off the big screen. Selling an impressive 1.5 million tracks off her self-titled debut album, including her current single “I Hope It Rains” along with her debut hit single, “Why Ya Wanna,” Kramer was named Academy of Country Music’s New Female Vocalist of the Year for 2013. Performing in 30 cities, Kramer just kicked off an America-wide tour opening for Grammy-nominated platinum-selling superstar Blake Shelton’s Ten Times Crazier tour this summer. While all dates can be found on her website, a highlight of the tour includes the following cities:
The Heart of the Country DVD features an exclusive first look at the music video from the movie for “The First and Last Time” sung by Kramer.
DVD heart of the country jana kramer