August 11, 2013
FTC Compliant Review Policy:
The product(s) featured in this review were provided free of cost to me by the manufacturer or representing PR agency for the sole purpose of product testing. Opinions expressed are my own and are NOT influenced by monetary compensation.

For all fans of Scooby Doo... You want to make sure you grab this...
Even if it means just stocking up early for a great Christmas gift!!!!
This 2 disc set is a must have for any Scooby and the gang fan... As it features the last 13 episodes of the Scooby Doo!  Mystery Inc show!!! 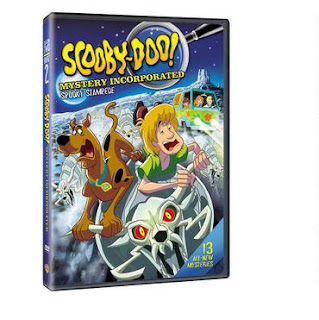 Crystal Cove, the most “hauntedest” place on earth is about to get creepier! Join Scooby-Doo, Shaggy, Daphne, Fred and Velma in a set of all-new adventures as they continue their thrilling and terrifying tour of their hometown in the final episodes of Scooby-Doo! Mystery Incorporated.  As the series draws to a close, the gang races against time, encounters sinister creatures and competes with other interested parties in order to solve the long buried secrets of their hometown. The sleuthing teens are also faced with having to solve one of their greatest mysteries yet – saving Earth from destruction! Viewers won’t hesitate to jump into the Mystery Machine for one wild ride after another along with Scooby-Doo and the rest of the Mystery Inc. gang in this must-own double disc set.

Scooby-Doo! Mystery Incorporated Season 2 Part 2: Spooky Stampede promises to be a season filled with engaging mysteries and non-stop action! The gang teams up with the Blue Falcon and Dynomutt to stop a giant dragon robot in Heart of Evil. In Theater of the Doomed, a historical re-enactment goes horribly wrong when the cast and crew are scared off by a specter during rehearsal.  Scooby-Doo and his pals are haunted by a herd of mutated skull cattle at a ranch in The Horrible Herd. In The Devouring, a monster appears in the middle of a cooking show. In Aliens Among Us, the gang is chased through a cave by extraterrestrials. Joining them along the way, are a variety of popular Hanna-Barbera classic characters including Dr. Benton Quest, Roger “Race” Bannon from Jonny Quest, Dog Wonder and many others.

“This adaptation of Scooby-Doo allows viewers to delve deeper into the personalities and lives of the series’ five central characters. The overall look and feel of the show is richer and more sophisticated than ever, with gorgeous animation and multifaceted storylines that are sure to draw in both kids and adults,” said Mary Ellen Thomas, Vice President Family & Animation and Partner Brands Marketing. She added, “Scooby-Doo! Mystery Incorporated Season 2 Part 2: Spooky Stampede is a must-have for Scooby-Doo collectors.”

The first season finale of Scooby-Doo! Mystery Incorporated was Cartoon Network’s most watched program of the day and ranked #1 with Kids and Girls ages 2-11 and 6-11, while also ranking in the top 3 with all Boys.* Additionally, the animated series’ first season finale delivered over 2.5 million total viewers.*

Scooby-Doo! Mystery Incorporated centers on Fred, Daphne, Velma, Shaggy and Scooby-Doo, who solve mysteries in the spooky town of Crystal Cove, a sleepy coastal village that boasts a long history of ghostly sightings, werewolves and glowing deep sea divers. Because of all the paranormal activity, Crystal Cove has become a tourist hotspot that capitalizes on its haunted reputation — and the gang's meddling is therefore not appreciated by the people of Crystal Cove. Executive produced by Sam Register, Scooby-Doo! Mystery Incorporated draws on the iconic look and feel of the original Scooby-Doo! series and is presented in a modernized visual style created by some of today's leading animation artists.

CLICK HERE To see a clip from the DVD.