December 17, 2013
FTC Compliant Review Policy:
The product(s) featured in this review were provided free of cost to me by the manufacturer or representing PR agency for the sole purpose of product testing. Opinions expressed are my own and are NOT influenced by monetary compensation. 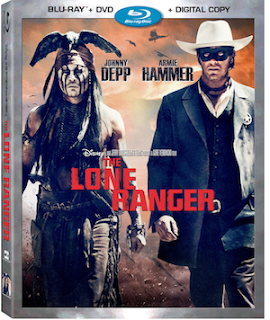 A couple of days ago we watched The Lone Ranger.
Talk about a great movie.  Honestly, I knew nothing about The Lone Ranger, prior to the buzz on this one... and let me be honest, I just wanted to see it because Johnny Depp was in it.  I told Marc that I thought Johnny Depp was an amazing actor, no matter what role he is in, he kills it... and for me, The Lone Ranger was no different.
When it first started though, I was totally lost...


I am not so sure what I thought about the flashback from the museum scene to the adventure that tells the story of The Lone Ranger... I know that there has to be symbolism in there some way or another, but it was lost on me...
Besides that (and let me be clear, it was not confusing, as some flash back movies are, it was just a bit of wonder as to why it was made that way...)  I loved the movie.  I was able to get Marc to watch it with me and Broxton would cruise in from time to time... At times he looked like he was totally hooked into it, but then he would go to playing or something else... I will say that he seemed to watch at least 85% of the movie though, so that says something...   I think he might have watched more, but this movie seemed like it was super long.


Are you familiar with The Lone Ranger?
It was about a group of Texas Rangers... and an Indian Tribe.
They have to learn to work together to get things accomplished, versus working independently, as they both seem to want so much more.
I enjoyed it and I am pretty sure that the boys will watch it while they are here... and once again, I will bet that Broxton will stop and watch from time to time again!
This would make an excellent gift for the movie lover on your list!!!
DVD dvd review Gift Guide Johnny Depp movie Review the lone ranger