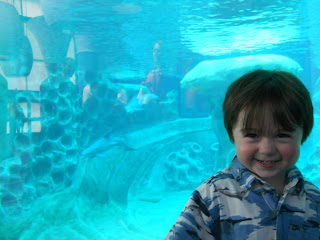 If you have ever been to my blog before, you know that Broxton and I recently spent the day at the Georgia Aquarium.
We had a great time, although my pictures did not really turn out the way I planned, we still have the memories.
You can read about / check out my photography by visiting Aquarium Part One and of course, stop on over and visit Aquarium Part Two.
This past Friday, we were part of a selected group that was able to go and watch the Dolphin Tales Exhibit before it opened to the general public.
I thought it was really neat, we got to go through a special entrance.
(That was cool, as that area had its own viewing area of fish that people do not see, unless they are in the Ballroom.) 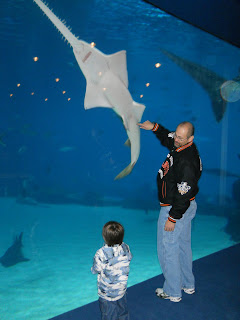 Then, we were escorted to the Dolphin Tales Exhibit.
You go up the escalator and then you go down a hall..
You then see the viewing window of the dolphins.
Of course, everyone was crowded around there...
I think the dolphins are so relaxing, that people could stay there all day! 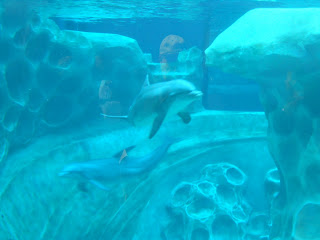 They were staffed well beyond what you would expect.
At every turn, you were greeted by people telling you to enjoy the show.
The smiles and attitude from the staff was just a small glimpse into what was in store.
We chose a seat in the middle, down towards the front.
(I think now that it is opened, it will have assigned seats, like a concert or show. Not really sure, but I noticed all seats were numbered.)
The seats were like you would expect, plain plastic (don't really want fabric at a show that includes water!)
Promptly at 2, the show started.
It lasted right at 30 minutes and I caught myself not only enjoying the show, but also enjoying the expressions on the spectators!
Old and young alike had the sheer expression of ENJOYMENT throughout the entire show.
Now, they said NO FLASH PHOTOGRAPHY.
So, I can not show you what it looks like...

But, you get there and they have 3 drop screens.
Once the show starts, they use it as visuals...
and then...
The star spinner takes you on a voyage and you see the dolphins perform.
I loved that it was very interactive...
At one point, the Star Spinner (the character of the show) has the audience sing along with him...
At another point, he asks for help is getting the wind to blow.
I really enjoyed it and I LOVED watching Broxton's face as the dolphins swam...
They jumped and did all sorts of tricks.
They even had the people swimming on them and with them...
Waving at the audience, doing their flips!
It really was beautiful to watch!!!
If you live in or near Atlanta, or if you are coming here for vacation, I for sure recommend making this part of your trip!
You can read more about the AT&T Dolphin Tales show by clicking HERE.
Just remember, it is new and very popular, so plan accordingly and buy your tickets in advance.
Oh... One more thing, you know the bar code scanners? You can download it at www.scan.mobi and have it on your phone... Once you have that on your phone, you can now scan the codes throughout the Aquarium and read more of the information that they have for each exhibit!
(I really thought that was cool!!!)

***** I was given complimentary tickets to go and view the Dolphin Tales Exhibit. *****
atlanta Broxton dolphins georgia aquarium