We finally saw @Dumbo and loved it. #ad

June 24, 2019
We have been trying to be better at going to the movies to see all of these wonderful movies that keep being released.  Thing is, it gets rather expensive when you buy the tickets and then what movie watching is complete without drinks and snacks?!?  We had totally planned on going to see Dumbo, but the weekend we got there to get tickets, we realized it had already left the theaters!
I honestly don't know who was more excited to see it... The kids, my mom or myself.  Either way, we were all so excited to learn that we would be getting it for review.  That just turned in to all of us watching the mail to see when it would show up.  We have been dealing with things at home (more on that later) so this was a great distraction for all of us and we were ready for this family movie night! 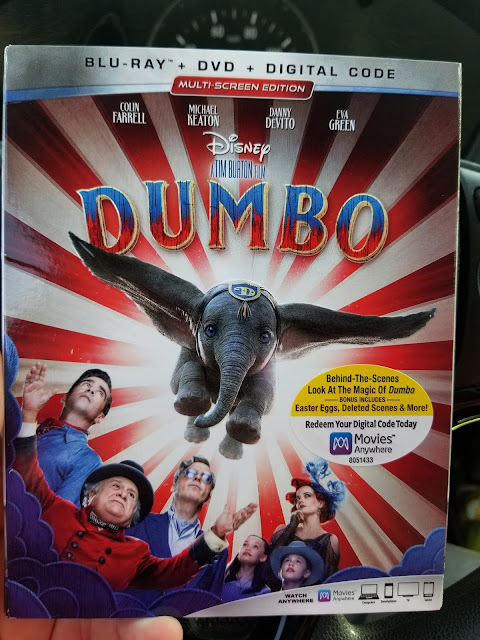 I will admit, I watched the original Dumbo (cartoon) when I was a kid... but I really had no remembrance of it, besides the fact that it was of a cute baby elephant with big ears!  Having said that, don't ask me if it was like the original or totally different, because I can not answer that for you.  What I can tell you is that my dad (the man who has to always be walking around doing something and will never sit and watch at least half of any movie)  actually sat and enjoyed our family movie night with us.  He even watched more than 3/4 of it with us!  That needs to be documented, as that is a rarity!  I thought the movie was cute, I loved that it gave the message of not letting anyone, no matter WHO that might be, come between you striving to follow your dreams.  Of course, the brother and sister working together was super sweet and I had to point out to my two that it actually IS POSSIBLE to get along!
We thought the movie was cute and Savannah has even asked to watch it again.  She has also mentioned her thoughts several times as far as them being mean to Dumbo just because it was "different"  and this is coming from a 3 year old!   Great movie and we are happy to add it to our personal library!

Press Release:
“Dumbo,” the grand live-action adventure from Disney and visionary director Tim Burton, which expanded on the beloved animated classic and sent spirits soaring, prepares for a landing on June 25. Disney invites fans to fall in love again with this heartfelt story, in which differences are celebrated, family is cherished and dreams take flight, when it swoops into homes on Digital in HD and 4K Ultra HD™ and Movies Anywhere, and physically on 4K Ultra HD,  Blu-ray™ and DVD — with never-before-seen bonus features, deleted scenes, Easter eggs and bloopers.

In “Dumbo,” struggling circus owner Max Medici enlists former star Holt Farrier and his children to care for a newborn elephant whose oversized ears make him a laughingstock. But when they discover that Dumbo can fly, the circus makes an incredible comeback, attracting persuasive but sinister entrepreneur V.A. Vandevere, who recruits the peculiar pachyderm for his newest, spectacular, larger-than-life entertainment venture, Dreamland.

“Dumbo” will be released in several different formats, giving families the flexibility to watch it on a variety of devices. Viewers can watch the film in Digital 4K UHD, HD and SD, and bring home a physical copy of the film as the 4K Ultra HD Edition (4K UHD, Blu-ray and Digital Code), Multi-Screen Edition (Blu-ray, DVD and Digital Code) and a single DVD.Bonus features include*:
BLU-RAY & DIGITAL HD:
DIGITAL EXCLUSIVE: