I loved the Garlic Almonds best! Thanks Sante Nuts! 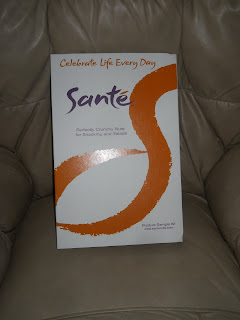 We received a nice package in the mail a bit ago.
I opened it and was surprised that it was a beautifully packaged Blogger Kit of Gourmet Nuts from Sante Nuts!
I thought to myself, if these nuts taste half as great as the packaging, we are in for a treat!
Then, Broxton had to come over and see...
It was wonderful!
We had several flavors to try : Garlic Almond, Candied Pecans, Roasted Salted Pecans and Candied Walnuts. Being from South Georgia, I thought for sure my favorite was going to be the Pecans...
I jumped in to try out the Candied Pecans (which Broxton really loved) but I enjoyed the Roasted Salted Pecans the best out of the pecans!
(Hey, we love Peanuts and I can remember picking pecans up and eating them at my great grandmothers house, she had a pecan tree right in her front yard!)
Well, I was wrong!
I fell in love with the Garlic Almonds! It was weird, they had a bit of a kick to them, to add a nice hint of spice, but the garlic was not to overwhelming! I thought I would devour the w…
Post a Comment
Read more Congrats to this round of winners!!!!Thanks for your support of my blog, don't forget to enter the current contests going on!

When you get an email that starts with "Greetings Earthling" you tend to take note... Just WHO is emailing me?!

It was an email letting me know that Olly Oogleberry and his alien buddies have landed on Earth! What?!
As I continued to read, I learned that Olly is actually a pretty smart guy... Straight from the email:
On Olly's website,www.OllyOogleberry.Com, explorers of all ages can learn about our galaxy through stories, videos, games, and more. Olly and his friends use their knowledge of the universe to share their adventures in hopes of captivating our minds and fueling our desire to learn. "The OllyOogleberry brand combines iconic design with a powerful underlying message that inspires all of us to learn more about the world we live in and appreciate the wonders of the universe we share," says creator Lou Hughes. In a time where space travel has been overlooked and taken for granted, Olly's only hope is that we never stop believing in the unknown.

Wow.
So, I just finished watching Water For Elephants with Robert Pattinson and Reese Witherspoon. I will tell you now, I love Reese and I have grown to like Robert too!

I really do think that I read this book before, although the friend that I though I borrowed it from says I am wrong...
Well, I will go on thinking I read it, although I am 99% sure she is right... But that is neither here nor there.
So, I was all excited to get to watch this movie, because of the cast... And yes, I knew it was a love story. Broxton was playing and decided that he wanted to watch with me. Now, he obviously did not follow the story line, but he loved seeing the animals so much that he wanted it on in the background as he played!

Long story short:
Jacob (Robert) is a student at Cornell University during the Depression. His parents are killed in a car crash and it is found out that they took a loan out to pay for his college... basically, now that they are gone, he is homeless. He ends up jumping on a train to t…
2 comments
Read more

Every time I see infomercials, I think I need them.I have been impressed by some and totally angered by others...
That being said, I wondered if the Perfect Meatloaf was going to help or not... There are some days that my meatloaf will just not stay together, basically falling into pieces as it cooks... Other days, it is decent. (Remember, I am not the best of cooks, but I do try!)

The Perfect Meatloaf Pan arrived and I was ready to try it out!
I followed the directions as it says to use... Then, cooked it... When it came out, I was so impressed with how you just lift it up and all the grease is left behind in the pan. I was going to take a picture, but my camera has been having issues...
I will be honest... I was more excited about the knife that they included... It was so cool. It was a knife with a little measure thing on it for perfect slices. I was ready. Then, fail. I was not impressed with the knife at all. It just did not work for me. I would rather use my big old plain knife. B…
58 comments
Read more

Having a boy, you would think that we never watched Angelina Ballerina in this house... If I said that was true, I would be lying. Granted, we never watched it until we received a DVD for review, but I tell you... It is cute and there is a boy on there that dances too!
Broxton enjoyed watching Angelina because of the music and dancing.
I know if you have a little ballerina in your life, she would love the 3-DVD Angelina Ballerina Gift Set that was just released on October 18th.
Not only will you get 3 DVDs full of fun episodes, you also get the bonus features!!!
Check it out and add it to your gift list this season!


Synopsis: ANGELINA BALLERINA™: HOLIDAY FAVORITES 3-DVD GIFT SET DESCRIPTION:Give the gift of dance and good cheer this holiday season with Angelina Ballerina™: Holiday 3-DVD Gift Set, a collection of delightful DVDs waltzing into stores October 18, 2011 from Lionsgate and HIT Entertainment. Celebrate the season with Angelina and all her friends as they prepare for the holiday sho…
2 comments
Read more

If you guessed that Broxton was going to be unwrapping the just released (on October 18th) 3-DVD gift set of Thomas and Friends, you did a great job!!!! I know he loves Thomas and he could watch him all the time... Hey, we just went to see Thomas last weekend!!! I was excited to see that they had a new DVD set out, as he loves to watch them on car trips!
Synopsis:
THOMAS & FRIENDS™: HOLIDAY FAVORITES 3-DVD GIFT SETDESCRIPTIONA very, merry holiday is right on track when you present your little engineer with the Thomas & Friends™: Holiday Favorites 3-DVD Gift Set, a new collection of adventurous, holiday-themed DVDs featuring Thomas and his engine friends, chugging into stores on DVD October 18, 2011 from Lionsgate and HIT Entertainment.Whether reveling at the Misty Island Christmas Party, sharing holiday cheer with the Sodor townsfolk or ringing in the holidays with smiles, laughter and song, Thomas & Friends continues to teach timeless life lessons such as discovery, friendshi…
3 comments
Read more

Christmas is getting closer and closer... Meaning, have you started your shopping yet?!
Lionsgate and Hit Entertainment just released a 3 DVD Box Set of Barney Holiday Favorites on October 18th!
If you have a younger child, you should really look into getting this... Remember, Barney is more than just a big purple dinosaur... He is their friend.. and he teaches kids so much!!!! (I am ready to see the Hit Favorites: Frosty Favorites, as it has Bob, Barney, Thomas and more of the characters we love!)

Synopsis: BARNEY™: HOLIDAY FAVORITES 3-DVD GIFT SET DESCRIPTION:Have a holly jolly holiday this year with everyone’s favorite purple T-rex as he and his friends ring in the joy of the season in Barney™: Holiday Favorites 3-DVD Gift Set, unwrapping in stores October 18, 2011 from Lionsgate and HIT Entertainment.Spend the night before Christmas at Santa’s Workshop, search for the perfect gold star to top the Christmas tree and welcome fellow preschool favorites Bob the Builder™, Kipper™, Thomas …
2 comments
Read more

This might be a bit of a nasty post...But it is something most people deal with!

Have you ever had a clogged drain? You know, you are standing there getting a shower and all of the water is taking a bit longer than normal to drain, so you are standing in water? When we first moved into our apartment, we quickly realized that the person that lived here before us must have done something with hair... Either did hair from the apartment, had lots of wigs, had long hair that shed oh to fast... SOMETHING. Why? There was hair everywhere.
Not that the apartment didn't clean it first, but we noticed hair in places that we had already cleaned before ourselves... Mainly, the drain. Finally, I called and told them they needed to send a plumber, as it just was not working for us... They sent maintenance and he worked and cleaned it out. It was nasty. That is all I am going to say, as I want you to keep reading.
My parents have a problem with their drain, so when I was given a chance to review …
3 comments
Read more 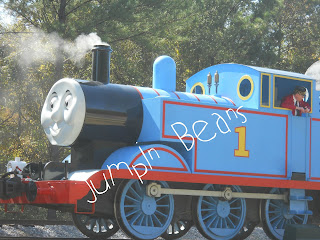 We spent the Day Out With Thomas again this year! We actually went this past weekend and had so much fun!
Have you ever been to a Day Out With Thomas? You can read about our Day Out With Thomas 2010 to see even more pictures.
After going last year with my parents, we thought it would be a fun "tradition" to start while Broxton is at the age that he loves Thomas. We had a 1:30 ticket time to ride Thomas, so we planned to meet them there at 11:30. There are several activity area's and we thought it would be great to get there early... Not to mention my dad was talking about the tomato salad that they had last year. (We hoped that they had it again, as he was looking forward to that, while we were looking forward to Thomas!)
We got there and while I went to get our tickets, my dad got in line for food and my mom went to grab us a spot at the picnic table area. Thankfully, they had the tomato salad! After a quick lunch, we headed on over for Broxton to get his face painted. He had …
2 comments
Read more

Do you have a collector in your family?
Do you like to display things in your home?
If you answered "YES" to either of those questions...or if you want to start collecting/displaying things... I have a product to tell you about!!!!

Z-Access 3D Frame is the item for you!!!
I was thinking this would be awesome if you collect sports memorabilia. Like an autographed baseball or a game ball you caught. Or, if your child received a game ball in little league... There really are many uses for this.
I thought about possibly displaying an autographed golf ball I have from Trace Adkins... ( I will need to explain that to you another day.) Then, I saw that they had a baby rattle displayed. My mom gave Broxton a silver rattle, so maybe I should do that? There are so many things that I want to showcase!

Also, Broxton is at the age where he brings me gifts... A leaf, rocks... acorns, a flower.... Maybe I could make a rotating "gift" display? If your little one is in school and they ar…
15 comments
Read more
More posts