October 13, 2019
Yesterday was a much needed day for the kids and I.  This past year has been pretty much a lot for us all...  Going from seeing my mom all the time to not that often with her diagnosis of Breast Cancer being a main one. ( She is doing pretty well for the most part, I just really don't want to take my kiddo's around her while her immune system is compromised and she has been on "house arrest" so she says with her numbers being low at times.)  So, like I said... a fun family day was just what we needed. 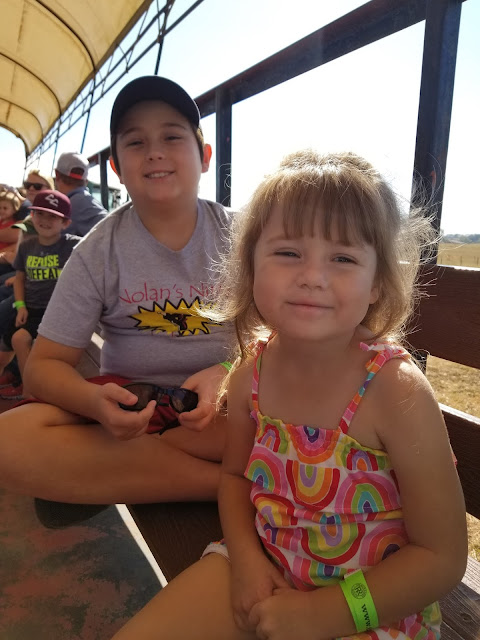 Headed to the main entrance.


Broxton and I have been to The Rock Ranch several times in the past, but it was a first for Savannah. It surprises me still when I mention this place that so many people have never heard of it.  We always go and spend the day with the place pretty busy, but when I mention it... it seems like it is our hidden gem since its such a big surprise to most!
The Rock Ranch is located in Rock, Georgia.
Round about distance from:
Albany, GA  - right at 2 and a half hours
Columbus, GA - hour and a half
Macon GA- right at an hour
Atlanta GA - hour and a half

Broxton remembered when we went, so he was telling Savannah all about it. He was even telling his teachers and friends about it, as it really is a fun day!   We got up and started the day with breakfast and headed on out to start our journey.  I remembered in the past that it is a huge parking lot and then you walk to the entrance to get your tickets, I wanted us to be rather early... Not only to have the whole day to play, but also to get a good parking spot, not gonna lie on that one!
Once we were on the other side of the ticket counter, the smiles and giggles started... You ride a big truck of sorts to get to the actual entrance (*or you can walk over, but I knew there was LOTS of walking ahead of us and one of us has shorter legs than the rest... so I knew this was the best option, plus she loved the ride!) 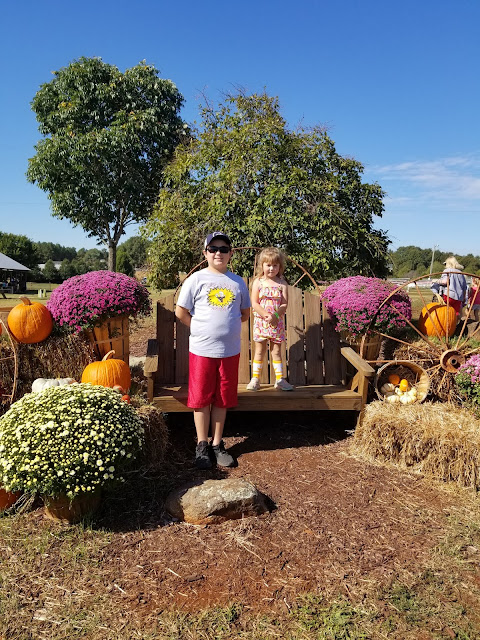 One of the first photo opp area's we had to stop at. 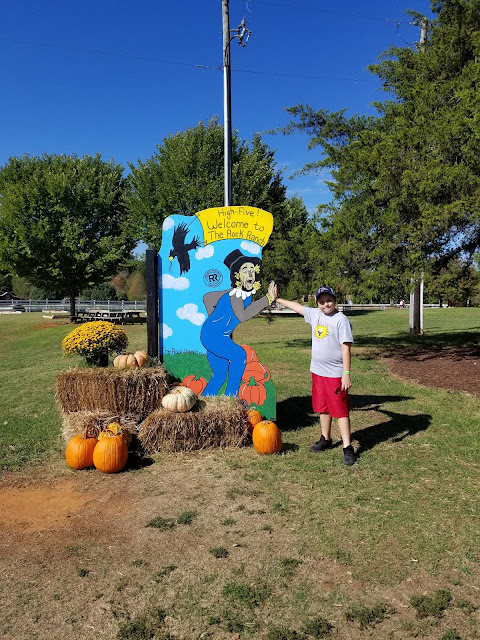 He didn't want to do the whole "high five" but he did it for his mama! 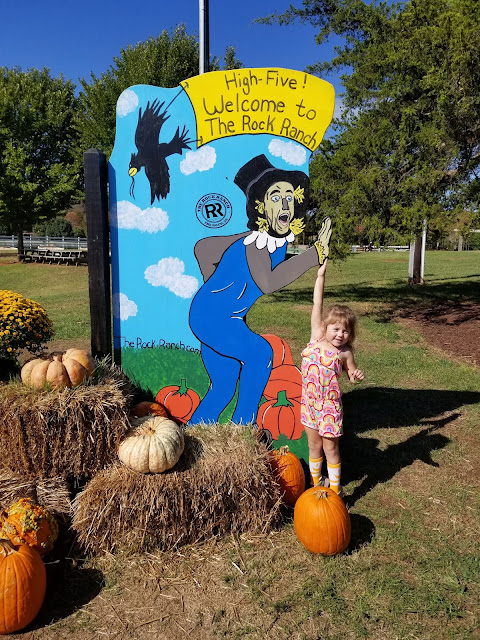 Savannah says that this was one of her favorite things from the day because she didn't think she could reach to give the high five at first!

Let me tell you this from the start... If you don't like walking ... and you don't like being outside, this is NOT the place for you. This is a 1,500 acre working cattle farm.  There is so much to do and it really allows you to disconnect and spend time with family.  They don't have sources of transportation to take you from one place to the next, you walk where you want to go. (*or in some cases RUN from place to place!)  When you first arrive, you are given a map and from there on, you go and do what you want when you want.  Oh, and there are LOTS of photo opportunities, that is always a plus for this photo loving mama! 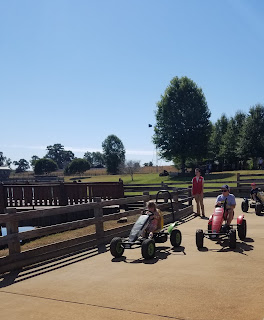 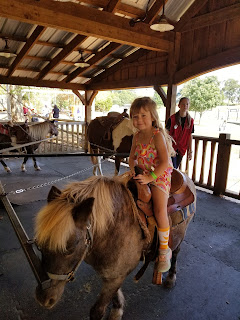 She tried to ride the pedal cars when Broxton did, but she just could not quite reach the pedals... She for sure will be able to next year.  Instead, I was able to take her to see the ponies.  She was so excited that she got to ride a "real live pony!" 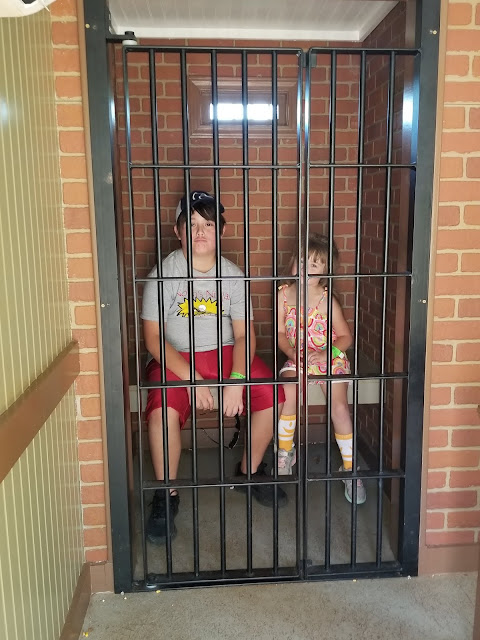 I should have left them in Tiny Town jail, but they were having so much fun... and someone busted them out!!!! 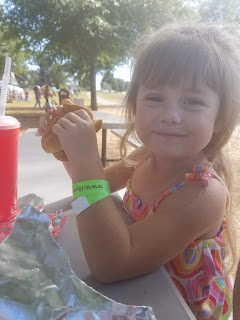 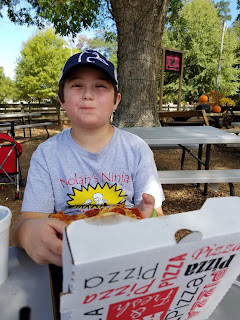 He said he needed to get pizza and she said she needed a chicken sandwich.  We did get the unlimited souvenir cup for drinks as soon as we got there.  I recommend doing this for sure!  They have a few places to get food and drinks located through out the place. 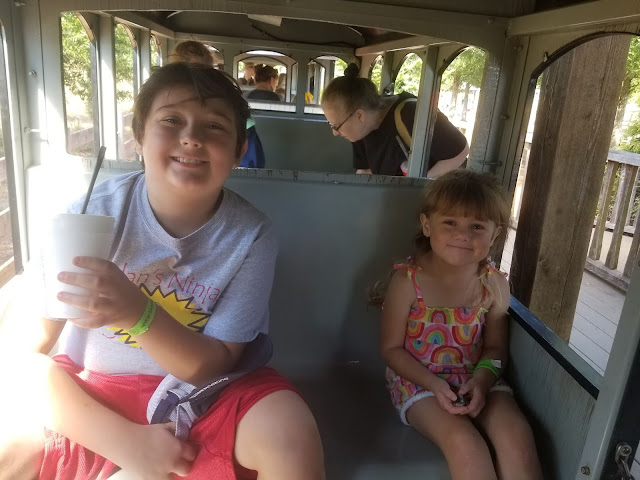 They were both excited to ride the train that circles around the whole place.  I enjoyed it because we got to take a break and sit and enjoy the view and wind!   We actually rode it two times and probably would have gone more if I had not reminded them that there was so much to do! 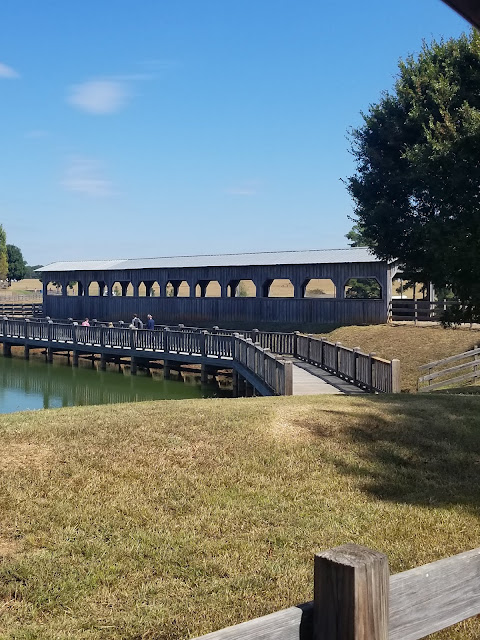 A view from our train car.  This was the little covered bridge that we rode over on the train.  Beautiful day and so many smiles! 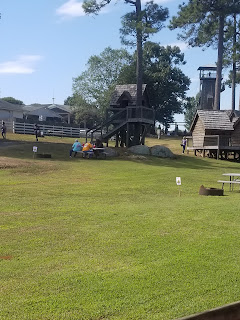 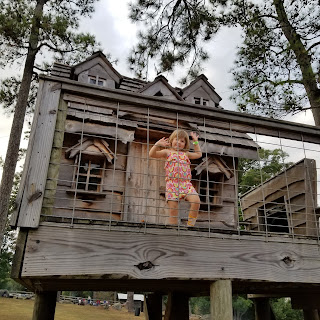 New to us was the Tree House area.  I will tell you, I want a tree house like that for our yard for the kids to play in!  They were so cute!!!!   They had slides and stairs and it was nice to just sit and let her run and play and laugh and squeal in excitement.  If you look in the distance, you see the tall tower, Broxton was over there doing the zip line while she was in the Tree House area! 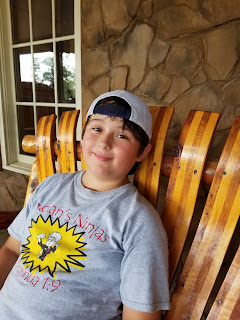 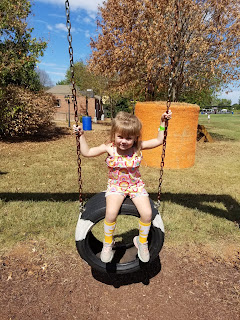 I am telling you, they really have so much to do.  I mean, we finally got the map out and had to mark off what we did, what we didn't want to do and then look to see which way to go next.  Right here, She is enjoyed the tire swings.  She had a great time on that as well as the spider web climbing area.  He is sitting in a chair at Truett's Barn that I would love to own, but the prices were just a bit too much for my paycheck! 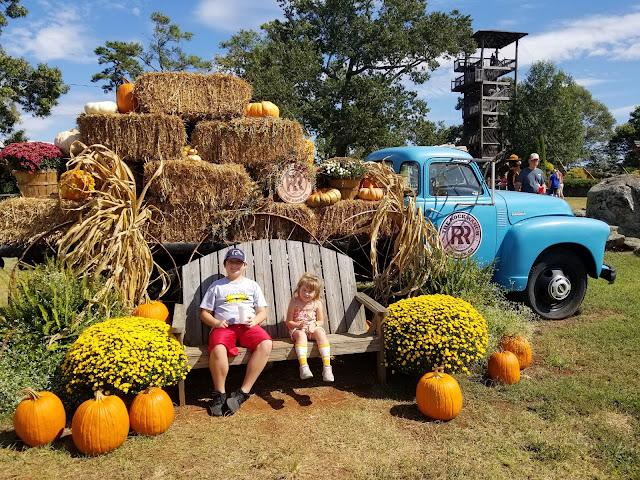 Remember I told you that they had tons of photo opportunities?  Yeah, here is another one... They actually had Curious George there earlier for photos, but we were eating at that time and didn't make it over for that photo.   Right behind here they had tons of flowers and you know that meant tons of butterflies... 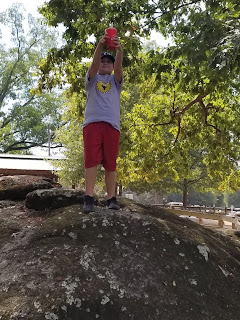 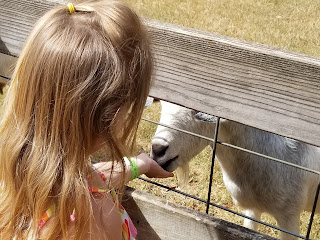 She had fun at the petting zoo area and he had fun climbing the rocks all over the place.  Here he is doing the scene from Lion King!  Ha ha ha... I told you, lots of laughs and smiles! 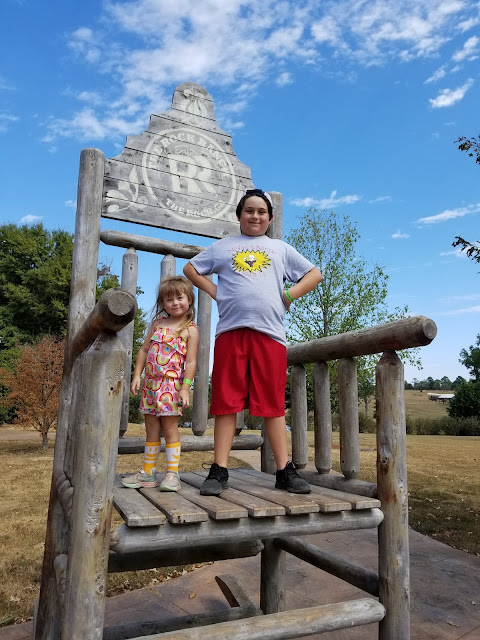 As with any fun trip, you know you have to climb in a big chair if there is one around...   Just look at the perfect day we had! 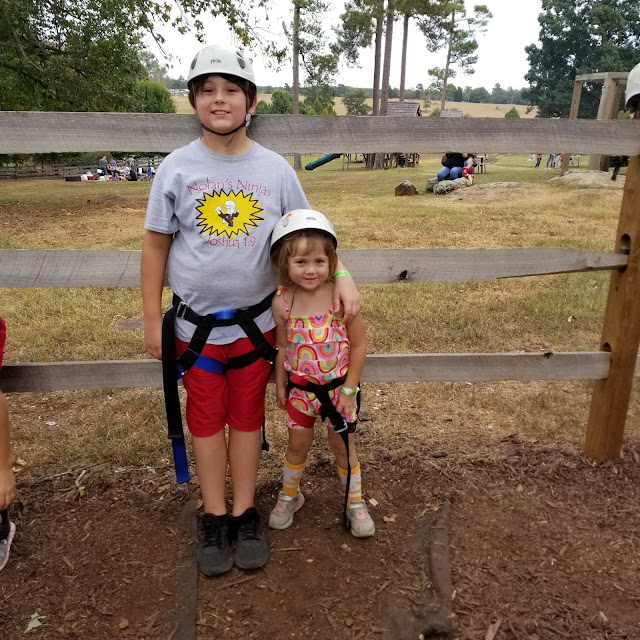 Oh, you know how I told you he went zip lining? Yeah... over the  800 ft AND the 1,200 ft long course!  Meanwhile, kid sister couldn't since she didn't weigh enough so she wanted to do the rock climbing wall. 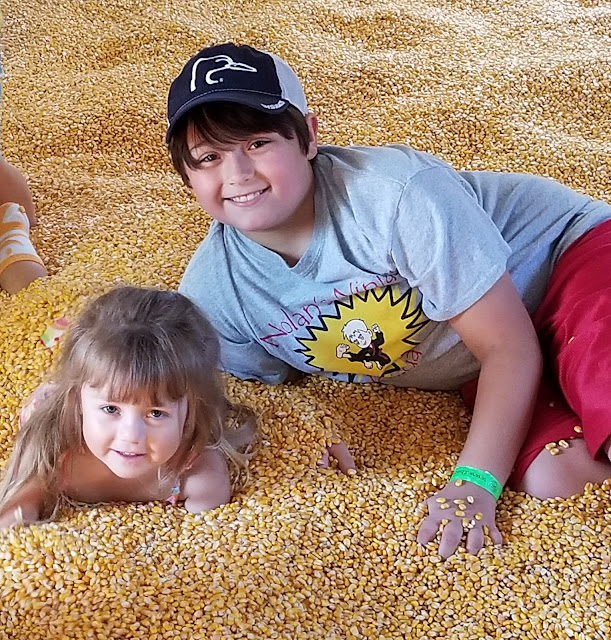 Nothing says farm life like a corn pit instead of a ball pit!   They had a blast! The Rock Ranch took a silo and filled it up with dried corn kernels and all the kids had so much fun! 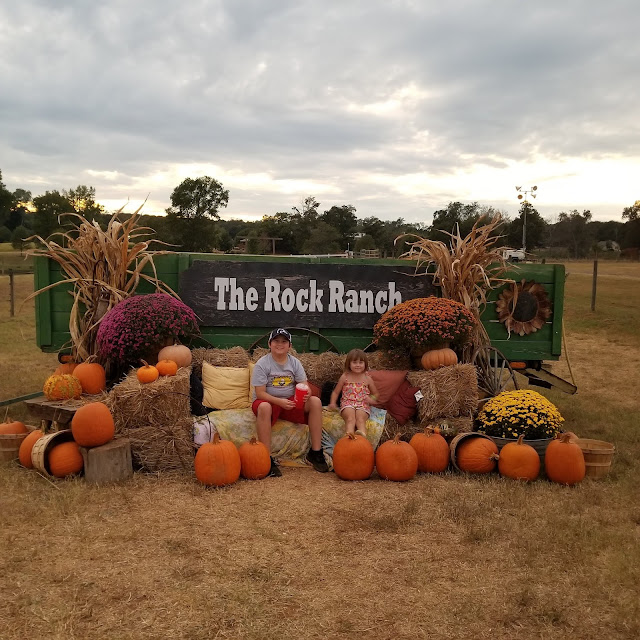 We got there pretty much right as the place opened and we stayed until after 7 pm.  We had a great time.  Let's see what all I might have missed.... the yard sized chess game, the yard sized checkerboard, family/friend tug of war, jumping pillow, archery, animal shows and more.  It really is a great way to get out and play.  You are exercising and since you are having so much fun, you don't even think about it.  Fresh air, lots of movement and like I said... so many laughs and smiles!  Heads up, next weekend is UP UP AND AWAY DAY with Hot Air Balloons!  We went in the past and it was so cool seeing them up close and personal!

Make sure you head over to the Rock Ranch website so that you can learn more about what they have planned for the holidays!
fall family days get out and play hosted making memories outdoor fun Review rock ranch