April 13, 2012
Somebody loves me...   Okay, it was sent for review, but I tell you...
Had someone sent me the brownie sampler that we reviewed, I would totally know that someone loved me!

The boys were lucky, as while they were here, we received a great custom Brownie Sampler from Gourmet Gift Baskets for review... 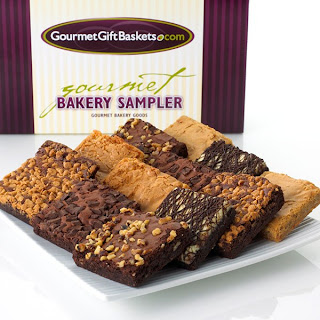 Wow..
There were 6 brownies in there and each was so delicious!!!!
The flavors included:


First up, we tried out the Belgian Chocolate.
We all agreed it was delicious!!!
(It was sent in a package that said "perishable" so our apartment office was nice enough to refrigerate it until we picked it up...)
As soon as we opened the box, it was a tough choice deciding what to try first...

Okay, so back to that Belgian Chocolate.
It was so moist and chewy and wow...
LOADED with flavor!!!!

Up next, we tried the Butterscotch Blonde.
I can not put on here what Marc said when he tried it (as I am family friendly) but you can imagine ...
It was heavenly!  I hate to say it, but I do not think that I have ever tasted anything that great!!!
It was so sweet, and chewy and yum!
I hated that I was so sweet to share, as I was left wanting more!!!!

I chose not to share the Cheesecake one and I guess because of my greed, I was not as impressed as I was with the Butterscotch one...  Lessoned learned!
We all tried and tried to rate them on a scale of one to ten, with ten being the best... but we kept giving them all tens!!! Even though, we did all agree that the Butterscotch was the best by far... meaning, it was a million!


Gourmet Gift Baskets wants one of you to enjoy the deliciousness that we tried..
So, one lucky reader is going to win a Custom Brownie Sampler just like the one received!


FTC Compliant Review Policy: The product(s) featured in this review were provided free of cost to me by the manufacturer or representing PR agency for the sole purpose of product testing. Opinions expressed are my own and are NOT influenced by monetary compensation.
a Rafflecopter giveaway
brownie sampler giveaway gourmet gift baskets Review snacks