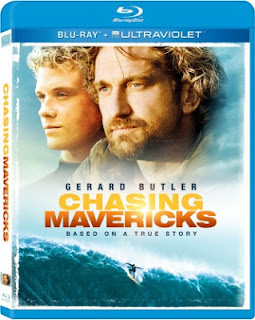 We watched a great movie the other night... Marc enjoys surfing, so I thought it was a good one to ask him to watch with me... I will admit, I was a bit confused in the start...
Chasing Mavericks starts with a young boy and girl at the beach (8 years old) and then they ride home with a complete stranger... It was 1987 and both Marc and I could not figure out how the ride seemed SO LONG coming back home, yet they got there with no car?  Confusing... Then, it turned into 7 years later and he sees the neighbor that lives across the street... It was just odd that they literally lived across the street from each other and from the looks of the scene, they had not seen each other is 7 years...
After that.. there is plenty of surfing and a great story line...
I really enjoyed watching the movie, but Marc wasn't as impressed with it as I was... Although the shots of the water were impressive to both of us!!!
I highly recommend this movie for those looking for a great movie to watch!!!

Chasing Mavericks
Chasing Mavericks is the inspirational true story of real life surfing phenom Jay Moriarity (played by newcomer Jonny Weston). When 15 year old Jay discovers that the mythic Mavericks surf break, one of the biggest waves on Earth, is not only real, but exists just miles from his Santa Cruz home, he enlists the help of local legend Frosty Hesson (played by Gerard Butler) to train him to survive it. As Jay and Frosty embark on their quest to accomplish the impossible, they form a unique friendship that transforms both their lives, and their quest to tame Mavericks becomes about far more than surfing.Chasing Mavericks was made with the help of some of the biggest names in the surfing world, and features some of the most mind-blowing real wave footage ever captured on film.

FTC Compliant Review Policy: The product(s) featured in this review were provided free of cost to me by the manufacturer or representing PR agency for the sole purpose of product testing. Opinions expressed are my own and are NOT influenced by monetary compensation.
Chasing Mavericks DVD family movie night Review surfing