Super Buddies is Now Available To Own

September 30, 2013
FTC Compliant Review Policy:
The product(s) featured in this review were provided free of cost to me by the manufacturer or representing PR agency for the sole purpose of product testing. Opinions expressed are my own and are NOT influenced by monetary compensation. 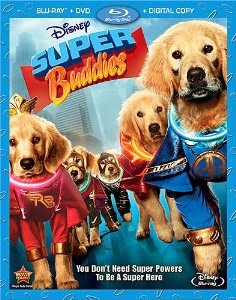 A little over a month ago, Broxton saw the commercial for Super Buddies...
I am not sure what it was that triggered him, but he was adamant that he really wanted to see that movie.  I had to try and explain to him that it was an advertisement for it coming out... that it was not available to watch yet...   So, every single day, he had to ask me if it was out yet... This kid did NOT give up!!!

I was so excited when I learned that we would be reviewing it..   As I knew that it was going to make Broxton SO HAPPY!!!  Each day, he was thrilled to go check the mail... and then it arrived!  We immediately snuggled up to have movie night...  It did not matter that it was the middle of the week... It was our time together!!

I will admit, it was not really what I was expecting, I just thought it was going to be those cute buddies being hero buddies... I did not know that there was an "alien" theme to the movie...
Synopsis:
Watch the fur fly as a new breed of super hero is born in Disney's fun-filled epic adventure. An ordinary day at Fernfield Farms turns extraordinary when Budderball, Mudbud, B-Dawg, Buddha and Rosebud discover mysterious rings that grant them each a unique super power. Before you can say, "Buddies, assemble," the pups unleash their amazing abilities and race to the rescue when a shape-shifting bully from outer space threatens the planet. But can they succeed in kicking major tail without revealing their new secret identities?

So yeah... these cute adorable pups are turned into SUPER BUDDIES thanks to these special rings...    Then, as they save local citizens, we see the creatures from outer space that are threatening the planet...  So...  it is totally kid friendly (the outer space creature takes on the shape of a pig....  things like this...)   Broxton loved it... I did think for a minute that he was not going to be a fan of the movie with the aliens, but he did!  So much that he had to ask if he could watch it with his brothers... and then he made them watch it twice!
I would say that Super Buddies were a hit in our house!
If you like the buddies, you will love this latest movie from them!!!!
Make sure to check out the Super Buddies website, there is lots of information and plenty of activities to make sure you enjoy the buddies!
disney DVD dvd review kids movie movie night puppy dogs Review super buddies