Shrek The Musical - Have Ya Heard?

October 26, 2013
FTC Compliant Review Policy: The product(s) featured in this review were provided free of cost to me by the manufacturer or representing PR agency for the sole purpose of product testing. Opinions expressed are my own and are NOT influenced by monetary compensation. 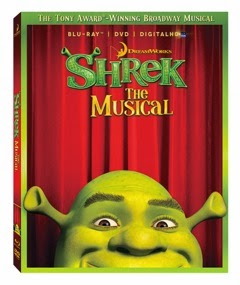 I am not sure if you have seen the hype over the latest in the Shrek Installments....
Shrek the Musical!
Yes!!!!   Check out the You Tube Video Here...
(Then come back later today to win a copy for your house!)

Bryan D’arcy James – Bryan plays the role of our beloved ogre Shrek. While he’s sure to win you over in his green role he’s definitely not new to the stage. Mr. Darcy will be star opposite Ethan Hawke in the Lincoln Center Theatre production of Shakespeare’s Macbeth. The talented artist is also notable on the screen too, most recently for his role as Frank Houston on NBC’s Broadway themed drama ‘Smash’.  You’re probably wondering if he sings too, and he does, his solo debut album is From Christmas Eve to Christmas Morn.
Sutton Foster - Princess Fiona is brought to life by the beautiful Sutton Foster. The multi talented artist (actor, singer, and dancer) is best known for her role in the fan favorite ABC Family series ‘Bunheads’, for which she earned a Critic’s Choice Television Awards nomination. Using her beautiful voice, Sutton has performed at venues across the country performing in concerts such as Funny Girl, They’re playing out songs, Chess, and many more.  Like her fellow cast mate, she also works on solo album projects, releasing two albums, Wish and An Evening with Sutton Foster – Live at the Café Carlye.
Christopher Sieber - Every story needs a villain and none is more villainous than Lord Farquaad, played by Christopher Sieber.  His performance as the miniature maniacal royal is sure to make your living room erupt with laughter and boo’s. Chris’ talent has also been enjoyed in various Broadway productions, such as Pipin, Spamalot, Beauty and The Beast, Into the Woods, and much more. He most recently debut his solo concert  “Minnesota Boy Does Well: Tales from Back and Center Stage.”  Fans of the Olsen twins may also remember him from the ABC comedy Two Of A Kind, in which he played the girls’ father.
Daniel Breaker- The character enjoyed equally by parents and their kids is Shrek’s smart tongued sidekick, Donkey.  As the liveliest character of the musical, Daniel Breaker brings sass, smarts, and laughter to the stage.  The Julliard Scholl Graduate has starred in several Tony and award winning productions such as Passing Strange, Cymbeline, and more. Off screen he has appeared in top titles such as Limitless opposite Robert DeNiro and Bradley Cooper, the Spike Lee-directed project entitled Redhook Summer and Passing Strange.

John Tartaglia - What do Pinocchio, The Magic Mirror, Dragon Puppeteer all have in common? They are all John Tartaglia. The talented Tartaglia is best known for producing, creating, and starring in the 8-time Emmy nominated children’s show “Johnny and the Sprites”. Additionally, he received a Tony Award Nomination for his role in the Tony-Award winning musical Avenue Q, in which he originated the roles of Princeton and Rod. Most exciting of all his credits may be his 12-year stint on Sesame Street, making him one of the youngest puppeteers to ever perform on the historic show.
shrek the musical