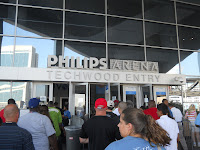 Okay, so 74 million years ago...
You know, during the summer!
We took the boys to the WWE event when it came to Atlanta.
They were so surprised!

How did we do it?
Well, we told them we had to go get Sushi (which they HATE!)
The tickets were at Ticketmaster at Publix...
Come to find out, you could not buy them there, day of the show...
So, I come out and tell them that the NEW sushi I wanted was downtown...
We would go and get it, then they could have whatever they wanted for dinner, as long as they TRIED my sushi.
We finally got downtown, you know... Atlanta traffic and all!
We parked and started heading that way...
I told them to hold on, that there was too many people.
They waited while I ran ahead to the ticket counter.
They gave Marc a free ticket, I had his military ID with me...
Yay for that!

Bought the tickets and went back to them.
I asked what they wanted to do, they were NOT feeling the sushi deal.
Then, I pulled out the tickets and said, Well, what do you feel about this?!
They were so excited! It was totally worth the traffic seeing the excitement in their faces!

The pictures are not the best, but hey... we had a great time! 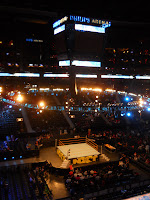 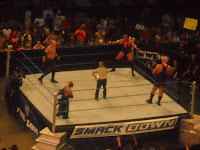 Broxton, taking it all in: 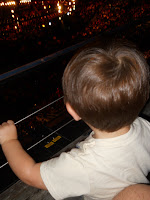 I actually got them to turn FROM the ring for a quick picture! 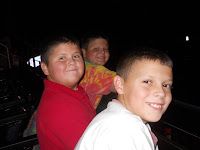 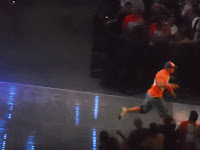 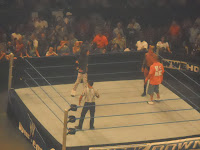 And of course, the Nexxus had to show up... 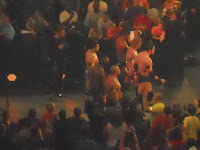 Ok, so you thought the post was over...
Let me just briefly tell you about John Cena -
He is more than a wrestler. He is also more than an actor...
He really is a good person.
He is very active in the Make a Wish Foundation, which he has been with since 2004.
( You can even buy a coffee cup from 7- Eleven with him on it and the proceeds go to Make A Wish! Remember, I am STILL LOOKING FOR ONE!) They mentioned something about he is the only celebrity besides Michael Jordan that is on the board, or something like that.. Please, do not quote me on that!!!
Last thing, he is VERY SUPPORTIVE of our military!!!
He always salutes before he enters the ring, he wears dog tags with his family members names on them... and he is very much a front name when they travel on the USO tours in support of our military!