Get in the Christmas Spirit - Angels Sing

December 04, 2013
FTC Compliant Review Policy:
The product(s) featured in this review were provided free of cost to me by the manufacturer or representing PR agency for the sole purpose of product testing. Opinions expressed are my own and are NOT influenced by monetary compensation.

Oh how I love me a Christmas movie!!!
Christmas movies always make the heart feel good and tell a great message... We were recently sent the movie Angels Sing and I knew nothing about it... All I knew was that it had Harry Connick Jr in it... and he cracks me up, so I was excited to see it based on that... I chose not to read the synopsis prior to the arrival, as I wanted to be totally surprised... Actually, I do that for many movies these days!!  I just grab them based on the cast and then get surprised with the story of it all...  When Angels Sing showed up, I was excited to watch it... and let me tell you, it did not disappoint!!!  I put it on to get myself more into the Christmas Spirit and it surely did!!!
Little did I know that the cast was more than just Harry Connick Jr. (I know it says it on the cover, but like I said... I just went with the big picture!)  I got to see Willie Nelson (love him... actually saw him in concert years ago!)  Kris Kristofferson and even Lyle Lovett!!
Angels Sing has us meeting Connicks character and his family... and you wonder what happened that has him so against Christmas...   As the movie unfolds we get greeted with Willie and he just makes me smile every time!   Head to grab you a copy now, you will be so excited you did... and just when you question if Christmas will change for them all, your heart strings get tugged just a bit tighter... 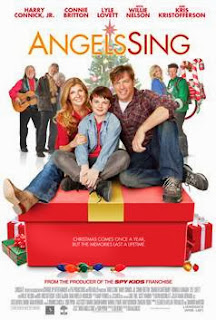 About ANGELS SING
Harry Connick, Jr. stars as Michael Walker, who, as a child, wished every day was Christmas. That is, until a tragic accident crushed his holiday spirit. Thirty years later, Michael still can't muster any joy for Christmas, despite encouragement from his playful wife (Connie Britton) and well intentioned parents (Kris Kristofferson and Fionnula Flanagan). But when his young son (Chandler Canterbury) faces a tragedy, Michael needs to make amends with his past. A mysterious man named Nick (Willie Nelson) gives Michael a gift that instills in him the courage to find the Christmas joy that he lost.

About Turk Pipkin
Turk Pipkin is the author of When Angels Sing, the Christmas novel that inspired the film ANGELS SING.  Turk is also a former stand-up comic turned writer and filmmaker.  He has directed three award-winning feature documentaries (NOBELITY, ONE PEACE AT A TIME and BUILDING HOPE) and had a recurring role in The Sopranos as Janice’s narcoleptic born again boyfriend.  He also founded The Nobelity Project, a global education nonprofit that works with Nobel laureates and other inspiring leaders to make enlightening and motivating films to raise awareness on global issues and move people to action.  With the Nobelity Project, Turk has helped raise millions to build schools, libraries and water systems for kids in the developing world.
angels sing Christmas Christmas movie harry connick jr kris kristofferson lyle lovett movie Review willie nelson