Sisters Forever from the #Disney Liv and Maddie show!

The product(s) featured in this review were provided free of cost to me by the manufacturer or representing PR agency for the sole purpose of product testing. Opinions expressed are my own and are NOT influenced by monetary compensation
If you have a young girl in the house that watches Disney, you might be familiar with Liv and Maddie... It is one of the hit Disney Channel shows right now.  I have seen it before, just because the TV has been on in the background, but it isn't one that Broxton watches.  I love seeing the kids in Broxton's school walking around with their reading books and I know that I will be seeing this one soon!   It is a book from the show and it even includes photos from the show as well!   What a great way to get kids more involved in reading and spending less time watching TV! 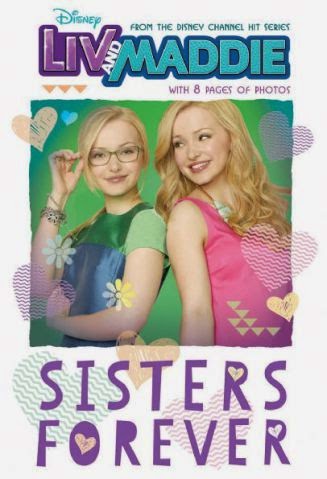 Sisters Forever
Ages 9-12
It’s a wrap on Liv’s hit TV show, Sing It Loud!-and her sporty twin, Maddie, is so excited to have her back home! But when Liv tries to play matchmaker for Maddie, her grand plan falls flat! Has Liv ruined Maddie’s chances with her crush forever? Then, when Maddie is voted basketball team captain, she will need to gain the respect of her teammates-with a little help from Liv! Will this be Liv’s most dazzling role yet? Or will her plan lose its sparkle? This hilarious junior novel has an eight-page full-color insert of photos from the show.
disney disney books Liv and Maddie Review sisters forever tween