Travel the World in your living room - We Did

October 06, 2011
Obviously, we can not jet set around the world...
Money doesn't allow for it, nor does Marc's schedule.
Not to mention 3 of the boys are in school.
Plus, even if we had the chance to travel, that doesn't mean that we would learn about a day in the life of someone from a different area.
That being said, we really want to know more about other cultures and how they live.
I was so happy that we were able to review two DVD's that were released last month! 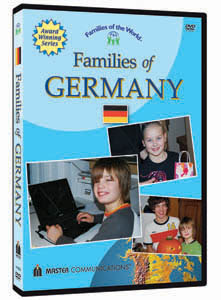 The first we chose to watch was Families Of Germany.
I was really excited about this and they did not disappoint!
First of all, it was neat that we got to see "their world" through the eyes of a child!
Each video shows two different families.
One from a rural area and the other from an urban area.
We learned that with all kids, they have English as one of their courses.
I think that the thing I loved most about the German video was learning about their "conversation bikes!"
That would be so neat to see here, basically it is a bike where several people peddle.
But, there is only one person steering, so you can all face inwards (like a circle) and carry on a conversation while travelling to your destination!
Germany

In Families of Germany, meet seven-year-old Sophia from the village of Reimershausen, who lives with her parents, sister Johanna and brother Simon. After a breakfast of bread, cheese and jam made from the fruit in their garden, she is off to school where she and her 19 classmates study English and biology among other subjects. Sophia studies guitar after school when she’s not helping out at a neighbor’s farm where twice a week she feeds cows and collects eggs from the chickens. Following dinner, she heads back to school for crafts and skits. During the weekend her family eats breakfast together, then enjoys activities – this particular weekend they are celebrating St. Martin’s Day, visiting Marburg Castle and attending her sister’s choral concert. A bedtime story from mom and dad and it’s off to sleep!

Ole is ten years old and lives in the capital city of Berlin with his parents, two brothers and two tortoises. It’s Halloween, so we get to tag along as Ole carves pumpkins, prepares treats for his neighbors before taking two trains to spend the day uptown, where we see conversation bikes, Segues and tour boats on the river. Upon their return, they head out for some trick-or-treating. The next day it’s back to school where Ole studies English and math while his dad, an engineer, works at a jet plane factory and mom teaches at an animal museum. After school it’s time for homework and dinner before heading off to handball practice. It’s been a long day, so bedtime is a welcome event! 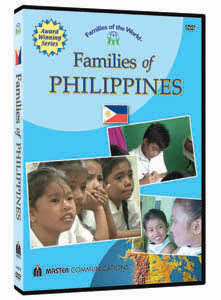 After watching the German one, we were intrigued to learn about the Families of the Philippines.
I hate to say it, but I never really knew much about the Philippines at all.
I mean, I have heard of it, but that was about it!
Watching this video, I have to tell you...
The Philippines are on my list as to a place I would LOVE to travel to!
Yeah, I had no clue that the Philippines were made of like 7,000 islands!
Once again, we get to watch a "day in the life of" through the eyes of two totally different children.
One child lives with his grandparents and goes to a school with over 10,000 kids!
What?!
The neat thing about his life was seeing that after school he stops by an "arcade" where he puts money in and then looks up things on you tube!
The other we follow is a girl that lives in the city.
She says that they all wear name tags to help the teachers identify them.
Talk about crazy!!!
I have never been in a school that big, not even college!
Also, at her house..
Her mom shops for fresh fruit and veggies daily.
I wonder how much they spend on food like that!
Philippines

In Families of Philippines, meet 13-year old Khim, a boy who lives on the rural island of Cebu with his grandparents, aunt and her two children. Living close to the coast, see the dozens of outrigger boats Khim points out as he explains how the fisherman collect the fish that he and his family eat nearly every night. Awaking early in the morning from his sleeping mat, Khim bathes, eats, and then makes the 10-minute walk to his public school, which boasts over 10,000 students. On the way home from school, he stops in the local video arcade to play games with his friends. Later at home, he completes his chores, which include feeding their goats, collecting firewood and cooking the rice for dinner.

Shahani, 7, lives in the capital city of Manila, a thriving city boasting many modern skyscrapers. Living with her mom, dad and older sister, the early riser (5 a.m.!), gets help from mom getting started in the morning before she’s off to school, where she wears a name tag to help the teachers with the over 5,000 students. During the 10 months she attends school, she studies English among other subjects. Mom shops for fresh fish and vegetables every day while Dad works as a children’s costumed birthday party entertainer and also teaches dance, which Shahani also studies (and excels – she won a local competition and was featured on television). Enjoying adobo stew for dinner and mango for desert, she and her sister welcome friends over in the evening for games and fun, then it’s off to bed for rest before her big test the next day!

It was really neat watching and seeing how different their lives all are in comparison to ours!
Oh, not to mention, the school...
I hate to say it, but seeing how focused they are on teaching other languages at such EARLY ages, that just goes to show yet another reason why kids from other area's seem to excel in education compared to the USA at times.
It was also pretty neat to watch and see how we are similar with other area's, but also how we are so different!
This is for sure a couple videos that we will show the boys when they come to visit!
Marc even enjoyed watching them, so you know they were good!!!
With him being in Afghanistan for a bit, I really think it would be neat to see the Families of Afghanistan video. He says it is COMPLETELY different from anything I have ever seen.
Quite honestly, I would love to watch them all, but Afghanistan and the United Kingdom are the two I want to see next!!!!
You can watch their You Tube Video Channel and learn as well.
FTC Compliant Review Policy: The product(s) featured in this review were provided free of cost to me by the manufacturer or representing PR agency for the sole purpose of product testing. Opinions expressed are my own and are NOT influenced by monetary compensation.
dvd review education Families of the World Review