You will never hear me acting like I know anything about history or politics.  I hate to admit that, but I am just not that knowledgeable about that sort of stuff.  When I saw that there was a movie being released called "Killing Kennedy" I thought it would be a great one to watch.  Honestly, I was always fascinated about the similarities in the death of Kennedy and Lincoln.
Lincoln elected to Congress 1846
Kennedy elected to Congress 1946

Lincoln shot in Ford Theater.
Kennedy shot in a Lincoln, made by Ford.

There are more things than that, but I was always so fascinated by that and I know that drove my want to watch this movie.  I also wanted to watch it with Marc, since he loves anything to do with history..
We watched the movie and I thought it was really good.  I will say, the casting department was AWESOME in the actors they picked to represent the characters.  At the end of the movie, they showed the actors photo from the movie and a photo of the person they played.. It was amazing how similar they made them look! Great job by makeup and casting crew!  When the movie was over, I had to get Marc's opinion and he said he was very impressed by the acting and portrayal of the characters... and he was very pleased that they did not stray from the facts that had been presented.  He gets to frustrated when the movies take their own spin on things, so for him to be happy that they said everything that was true was a great bonus!!!
If you are a history buff, a fan of Robe Lowe or just like movies in general, you will enjoy this movie! 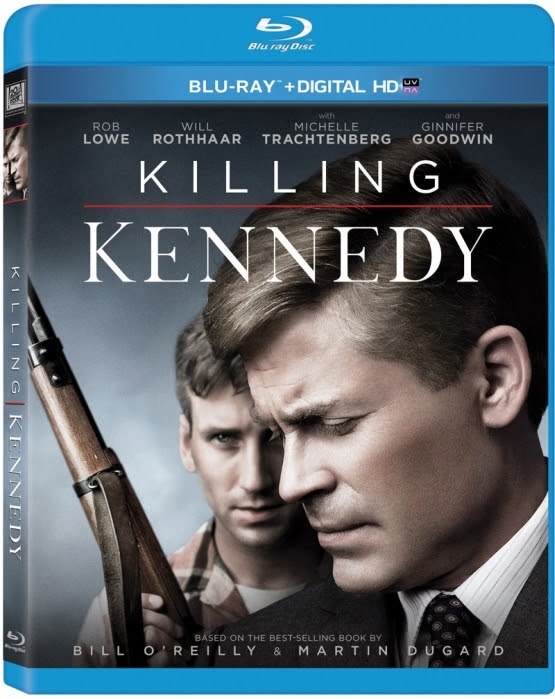 KILLING KENNEDY chronicles one of the most beloved United States Presidents, John F. Kennedy, and the shocking story of his assassination. The movie premiered on the National Geographic Channel and was seen by more than 3.4 million people, making it the most-watched broadcast in the network’s history. This epic journey is the second in a trilogy of books written by Bill O’Reilly and his researcher and partner Martin Dugard that have been adapted for the screen with National Geographic and Scott Free Productions. The first release in the trilogy was “Killing Lincoln,” a powerful display of the outrageous events surrounding the assassination of U.S. President Abraham Lincoln. The final instalment in the trilogy is “Killing Jesus,” which follows the events leading up to the crucifixion.
The KILLING KENNEDY Blu-ray™ and DVD are loaded with never-before-seen special features that go even deeper into the conspiracy that shook the nation including an extended feature; behind-the-scenes featurettes, as well as an exclusive interview with author Bill O’Reilly!
DVD history killing kennedy movie Review rob lowe