December 18, 2015
FTC Compliant Review Policy:
The product(s) featured in this review were provided free of cost to me by the manufacturer or representing PR agency for the sole purpose of product testing. Opinions expressed are my own and are NOT influenced by monetary compensation.

We were recently sent the K'Nex Combat Crew 5 in 1 Building Set for review.  Let's just go ahead and get this out of the way... It says for ages 7+, but this 30 something year old mama was struggling.  That isn't saying a lot, since I know my eyes aren't as good as they used to be and my hands are much bigger than a 7 year old, but whoa nelly... that was some work!

We decided that since Broxton had been doing SO WELL in school, we would allow his elf to give it to him.  It was great as it was supposed to be a daddy and son event.  Yeah, that quickly ended when the patience of daddy went flying out the window and mommy had to step in.  Broxton was getting frustrated, as we were both trying to do the same thing, but he did "help" for me to just go at it solo.
I feel like it took 7 million years.  *Maybe that was what the 7+ was for... the number of years it takes.. not the age of the child?  I will never know!  We finally got it completed, but leave it to mama (I blame the elf for not paying better attention!)  No batteries.  That gave me the chance to say " don't play with it until tomorrow when I go and get some batteries for it."  We did that several days ago, but batteries have yet to be purchased. This mama is struggling this year!
Anyways, it is built. It is AWESOME.
He loves it.  We made memories doing it.  I say it was a success! 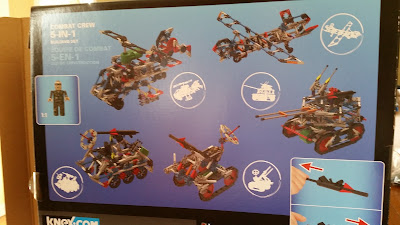 The Combat Crew has 5 different models you can choose to build.  We decided to go with the helicopter first.  I tell you this, it is MASSIVE.  This is NOT some little rinky dinky helicopter.  It is the real deal and to be honest with you, I think my dad would have loved to have built this with him!  (Maybe they can do another model, once I decide to let him take this one apart.)  I was surprised he did not want to do the tank, although I do believe that the tank will be the next one we attempt to build.  I love that it comes with a little figure as well!  Perfect for playing right away! 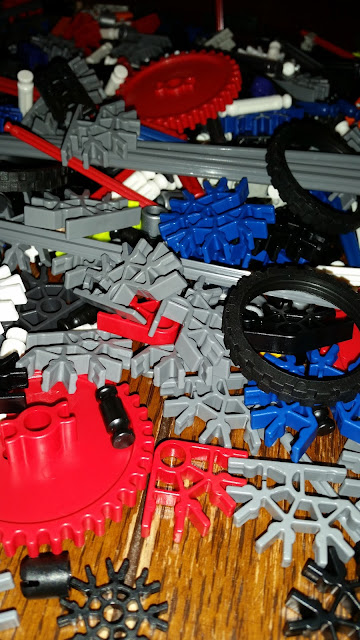 This is what the "helicopter" started out like.  After much work, we ended up with this: 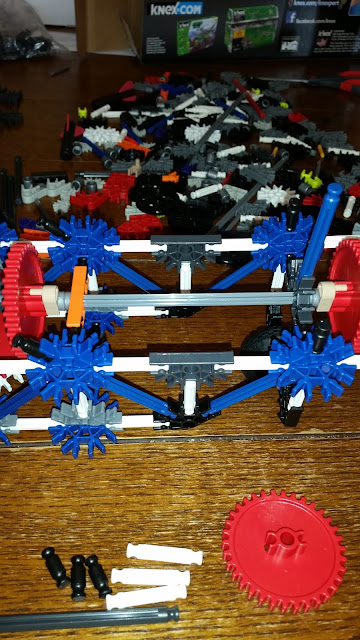 See?  We are getting there.  Slow and steady wins the race, right? 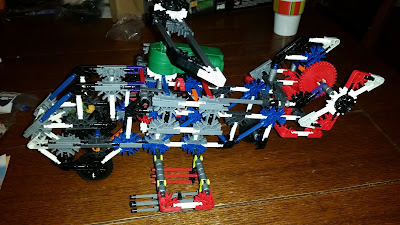 Oh yeah!!!! We are DONE!!!!  I love it.  They made it have several different key features that makes it perfect for any combat zone they may be headed into!  *See the missiles on the front bottom of the photo?

Read more about it here:
Combat Crew Building Set (#31480)
Build your artillery and establish your army with the Combat Crew 5-in-1 Building Set!  Includes 539 pieces to build 5 different models - APC, Helicopter, Tank, Drone, and Anti- Aircraft Vehicle!  Build the Drone and Anti-Aircraft Vehicle at the same time and battle!  Remaining models can be built one at a time.  Includes a motor that moves the models and a working dart launcher to fight enemy forces!  Also includes an exclusive combat figure that sits in the vehicles.  Motor requires 2 "AA" batteries, not included.  Suggested Retail Price is $49.99.  Perfect for builders ages 7+.

We really enjoyed it and I know it will bring HOURS of fun for you and your family as well!!!  Head on over to the K'Nex site to see what else they have that grabs your attention!  Make sure to also follow on  Twitter and Instagram.
building combat crew Gift Guide K'Nex kids Review toy