July 04, 2020
When the first Trolls movie came out, we were so excited.  We loved that movie and have so many toys/ coloring pictures/ memories singing the songs and quoting right along with the movie. We had planned on seeing Trolls World Tour in the theater... but COVID had other plans.  We have been planning to have a movie night to watch at home, but life has been a bit chaotic lately and we have yet to make the time to do that. With so many great activities that have been shared with me, I wanted to share with you and hopefully make plans to do the activities and then have movie night to enjoy.
(Can't beat the DANCE PARTY EDITION.) 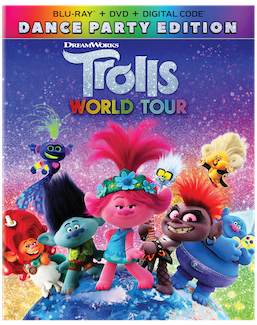 FTC Compliant Review Policy:  The product(s) featured in this review were provided free of cost to me by the manufacturer or representing PR agency for the sole purpose of product testing. Opinions expressed are my own and are NOT influenced by monetary compensation.
Press Release

Queen Poppy (Anna Kendrick), Branch (Justin Timberlake), and the rest of your favorite Trolls are back for another musical adventure that’s bigger—and louder—than ever before! In TROLLS WORLD TOUR, Poppy and Branch discover that their kingdom is only one of six musical realms—Funk, Country, Techno, Classical, Pop, and Rock—that were once united in perfect harmony. When the power-hungry ruler of the Rocker Trolls threatens to silence all other music so her tribe can reign supreme, Poppy and Branch must embark on an epic quest to unite the realms of Trollskind, before the songs in their hearts are lost forever! The film is currently available for early viewing on a wide variety of popular on-demand services as a premium rental offering.

Activities as you prepare for excitement:
Poppy's Headband
Poppy's Popsicles