July 04, 2020
UPDATED TO ADD:
Back in February we had a movie night and enjoyed Playing With Fire... I figured since we were going to pull the yard game out today to enjoy the Fourth Of July, it was a great time to remind you of this movie!  Since many places are cancelling fireworks tonight, maybe you can watch this and make it a movie night?
--------
When the older boys were younger, they were obsessed with watching WWE wrestling.  I watched with them and became a fan of John Cena.  Lucky for me, he started starring in more movies and while our days of watching wrestling are in the past, we can all still enjoy him showing his talent on screen!  We have made it a point of going to the movies at last once a month as a family.  While we did not see this one in theaters, it was on our list to try and do so..  To say that I was happy to review it would be an understatement. We were sent a viewing kit to make a weekend out of it.  Flavored popcorn was a hit with everyone and might be a tradition worth starting for home movie nights!  We were also sent a huge game to play outside... and I know that will get some enjoyment soon enough!
Now.. on to the movie... 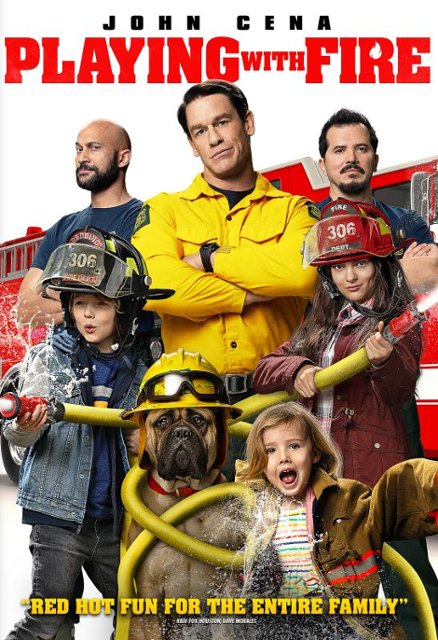 FTC Compliant Review Policy:  The product(s) featured in this review were provided free of cost to me by the manufacturer or representing PR agency for the sole purpose of product testing. Opinions expressed are my own and are NOT influenced by monetary compensation.
From the press release:

The Digital* and Blu-ray releases deliver even more laughs with wildly funny bonus content.  Sit down with Captain Jake (John Cena) as he reads a bedtime story with an amusing twist; see what you missed in theaters with deleted scenes and laugh-out-loud bloopers; plus, enjoy behind-the-scenes featurettes with the cast.

When firefighter Jake Carson (John Cena) and his team (Keegan-Michael Key & John Leguizamo) rescue three siblings in the path of a wildfire, they quickly realize that no amount of training could have prepared them for their most challenging job yet – babysitting. While trying to locate the children’s parents, the firefighters have their lives, jobs and even their fire station turned upside down and learn that kids – much like fires – are wild and full of surprises.

I will have to tell you this...
I was not familiar with "smoke jumpers" until we watched this movie.  I guess I never really thought about it before, but I do now!  We loved the movie and of course Savannah was a fan of the birthday party scene!!!!

Have you seen the movie? Are you a fan of John Cena movies?
DVD Family Movie john cena Review