We all know that we are not the biggest water drinkers in this house..
But, I will drink bottles of water... I just do not like the thought of a tap water glass at dinner...
That just isn't me....  not really sure why, but it could be because where we used to live (before Marc deployed) was just WRONG.  I mean, really REALLY wrong.
That water was so funky... It had an odor to it when you drank it, yes... that also meant it affected the ice.
Anyways, that ended our quick sips of water... and we were bottled water drinkers from then on.

I finally realized how much WASTE was being made by our house with the trash from drinking bottles of water and I decided that we should try the water pitcher idea.
Actually, that was what I asked my brother to get me for Christmas and it worked pretty good for us.
We were able to drink water ... without all the trash.

I was recently given the chance to try the ZEROWATER pitcher and you guessed it...
I am impressed!
So much that I have now figured out what I am giving my grandparents for Christmas!
(Side note, my grandparents have always been tea drinkers, but last time my mom was there... tea was no longer offered... it was just water... yep, from the faucet!  Seems as though my grandmother thinks that is best for my grandaddy, so that is what is going on.)
After trying this pitcher out...  Let me tell you why this is the one of choice for them in my opinion.

It has an easy set up:
Open the box and unwrap the plastic from the pitcher. (I liked that it was in plastic wrap, as it made me feel safer that it was clean... Yes, I still washed it, but just overall, this settled my "germophobe" a bit)
Wash everything.
Screw in filtration system to the pitcher area.
Pour your water in and then wait. 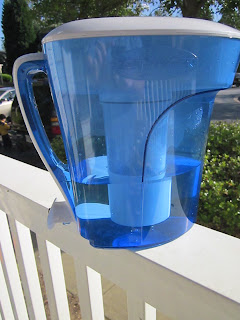 Besides the ease of setting it up, I love that it had not only the option to use it like a pitcher and pour it from the top, it also had a water cooler type nozzle that makes it easy to just stick your glass under it and press for the water to flow.  That was a big one for me... I know that some people are not able to pull a pitcher out... Maybe the strength is gone to do so, or maybe their balance is off... this would be great... (totally thinking of my grandaddy in this one!)  I also liked that for our house thinking about when the boys are here for the summer... I can just sit this pitcher out on the porch and they can run over and press the button to get more water when they want it! 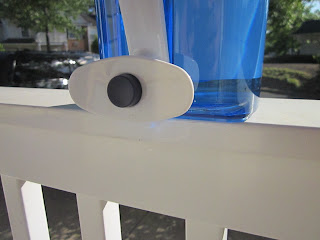 Finally, it comes with the water tester... Now, it reminds me of a pregnancy test how it is just that stick and you place it in your water... I admit, as soon as I opened it, I was like "great, this is something else to have to keep up with?"  But, it actually has a little spot on top of your pitcher to place it for storage when you are not using it!

If you are like me and really want water that is good for your house...
Head on over and purchase a ZeroWater Filtration Pitcher for your house now!
Lucky for you.. You can enter coupon code MC30, which will give you 30% off a 10 Cup ZeroWater pitcher

Also, I get the chance to host a giveaway for two lucky winners...
So, Who would like to win a ZeroWater pitcher for their house?!

“I wrote this review while participating in a blog tour by Mom Central Consulting on behalf of ZeroWater and received a water pitcher to facilitate my review, two pitchers to giveaway, and extra filters to thank me for taking the time to participate.”