The Peculiar Tales of the S.S. Bungalow

December 24, 2014
FTC Compliant Review Policy:
The product(s) featured in this review were provided free of cost to me by the manufacturer or representing PR agency for the sole purpose of product testing. Opinions expressed are my own and are NOT influenced by monetary compensation.

I know some of my readers enjoy the kids music I cover from time to time.  I have not reviewed this, but did want to share in case you were looking for something new to check out, The Peculiar Tales of the S.S. Bungalow. 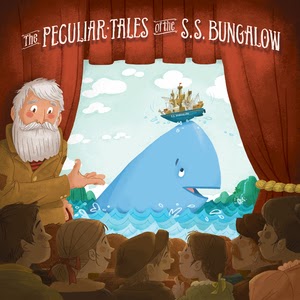 Just launched digitally via iTunes  and other retailers, and a 2-CD illustrated digi-pack will be available to retailers nationally in January (Big World Audio Theatre, Burnside Distribution). Preview this magical, multi-voiced musical voyage at bigworldaudio.com.
The story begins on a bustling pier, full of the sights, sounds and smells of a fisherman's market. Above the din, a voice is heard inviting people to come near an odd and misshapen building: The Museum of Maritime Wonderments and Nautical Oddities — a place where strange and mysterious findings from the Atlantic are on display. A small crowd gathers around to hear the most fantastic tale about a curious old wooden ship and the man who once captained it. We then travel back in time to when Sleepytime Greg and his crew (best friend Toothpick and pet beagle Tater-Tot) transform a creaky old boat into the S.S. Bungalow to set sail across the Atlantic Ocean. In their quest to reach the notorious Lullaby Islands to grab the treasure, the intrepid travelers discover all sorts of “Obstacles and Riddles,”“Purple Icebergs” and “Amphibious Legends” before an albatross leads them to meet the fearful “Lullabeans” on the islands where “Monsters Never Sleep.” Instead of a treasure of jewels and gold, through their own music and the songs of magical toads, they discover something much more valuable than buried treasure: “Where before there was fear and suspicion, there were now new friends gained.” All through the story, children chime in to question gaps in the plot development and move the story along.
Dozens of musicians, artists and actors participated in the making of The Peculiar Tales of the S.S. Bungalow, a seafaring adventure that weaves a fantastical voyage through story and song. Creators Laki Karavias (founder of Magmatic Northwest creative studio), and singer-songwriter Jason Reuter, gathered the roster, mostly from Portland, but also from a nationwide talent pool. Seasoned voice actor Kevin Barbare delivers the engaging narration. Noted children’s book illustrator Ward Jenkins created the album art. Eric Earley (Blitzentrapper) performs several instrumental and vocal tracks, and gospel singer Liz Vice is the little clown fish with a big voice on “Barnaby’s Song.”
kids kids music Review The Peculiar Tales of the S.S. Bungalow