August 22, 2016
Did you watch The Wonder Years when it originally came on, or were you late to the party and watched reruns?  I am not really sure when I saw them.  The show aired from 1988-1993, so it would have started when I was 9.  I am guessing I watched some as reruns and probably caught some as they aired originally.  I do know that the older I get, I love being able to watch shows from the start and in order, so I am thrilled that The Wonder Years are on DVD.  You can purchase them in individual seasons, fyi... season 6 (the final one) is about to be released... or you can purchase a box set.  I like the individual seasons, so I can loan them out solo, but the box set always has nice additional figures to make it so much fun to own! 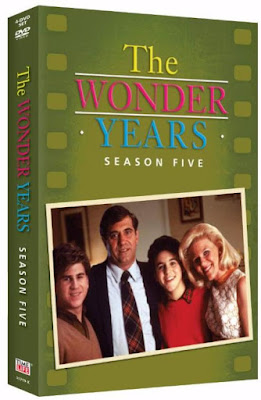 THE WONDER YEARS: THE COMPLETE FIFTH SEASON contains all 24 engaging episodes from Season 5 (October 2, 1991-May 13, 1992) in their original broadcast versions.  After a brief stint at the lake and equally brief summer romance in the season premiere, "The Lake," Kevin returns home to start school at McKinley High.  Between Driver's Ed drama, love triangles, a controversial English teacher, R-rated movie, and an unforgettable double date there's plenty of excitement at McKinley.  Meanwhile, the Arnolds throw an epic Christmas party and Wayne and Wart decide to join the Army.  David Schwimmer continues his guest starring role as Michael, demonstrating his love for Karen on the Arnolds' front lawn in a very romantic scene in the pouring rain.

Alongside the acclaimed bonus features specially-produced by the TV DVD archivists at Time Life, including in-depth interviews and a behind-the-scenes featurette, the new-to-retail set includes over four dozen songs as they were featured in the original broadcast, with classics by Jackson Browne, The Byrds, Bachman-Turner Overdrive, Sonny & Cher, Creedence Clearwater Revival, The Band, James Brown, Joni Mitchell, Joan Baez, Percy Sledge, Sly & the Family Stone, Linda Ronstadt, Traffic and many more, plus Joe Cocker's unforgettable rendition of The Beatle's With a Little Help from My Friends.