April 04, 2017
We love movies here. It is fun to unwind and just relax from time to time. I had no clue that an elementary aged child could have such a busy social life! It is nice for a break, so when we get the chance to review movies, we are all about it!   We were lucky enough to be sent The Swan Princess - Princess Tomorrow Pirate Today for review a bit ago, so when we were told about The Swan Princess - Royally Undercover, we were all super excited to watch it! 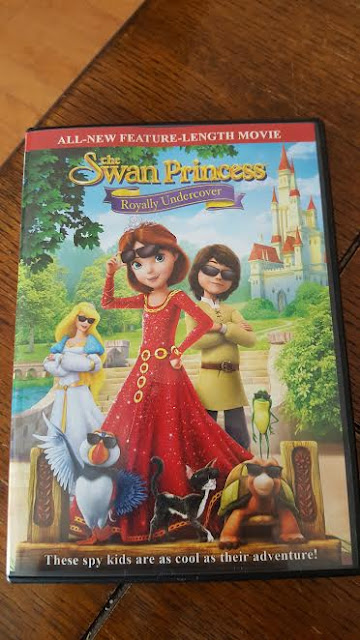 After watching the first one, I knew Broxton was going to watch this one too!  Although the title is about a Princess, it is so much more than that. Both boys and girls will love it.  In the latest movie, Princess Alise teams up with Lucas to become spies!  Hello!  You know that has the attention of kids everywhere!
The cool spy gadgets are awesome and I think they would be able to make a good thing out of making toys to go along with this movie! Dolls for the characters, plush (and figurines) of the animals, the spy gadgets, the ship and the castle... Come on, let's get on it!  I have two kids that would love the whole set.  Anyways, getting back to the movie.
I think this movie would make a great movie night.  We are on Spring Break and the weather started off pretty nasty. This was great for us.  Maybe you can plan a movie night, or have it for entertainment while headed to your destination.  Even better.. EASTER basket filler!   Yes!  Kids (and adults) will love it!

Read on for more information:


The Swan Princess is back, with an all-new feature length movie! Get ready to go on an undercover detective adventure when THE SWAN PRINCESS: ROYALLY UNDERCOVER arrives for the first time on DVD March 28 from Sony Pictures Home Entertainment. The newest installment of the beloved animated franchise follows the enchanting tale of young Princess Alise and her friends as they embark on a new adventure where they solve a royal mystery using their detective skills and spy gadgets. Featuring fan-favorite characters and all news faces, this next installment is the perfect fit for a new generation of Swan Princess fans, as well as nostalgic fans of the franchise.
Join “The X Factor” star Macy Kate in the studio as she records the theme song for THE SWAN PRINCESS: ROYALLY UNDERCOVER, "Born to Be Me." Macy Kate also sang the theme song in the previous installment, THE SWAN PRINCESS: PRINCESS TOMORROW, PIRATE TODAY, which was titled "I'll Be Your Star."

Synopsis:
After mysterious visitors arrive in the Kingdom, Princess Alise, Lucas and their friends go undercover on a secret spy adventure to see if they can be trusted. They will need all of their superior detective skills as well as some super cool gadgets to solve the royal mystery and save the Kingdom.