Dive Into Curious Critters Marine in the Third Installment from #DavidFitzsimmons

June 12, 2015
FTC Compliant Review Policy:
The product(s) featured in this review were provided free of cost to me by the manufacturer or representing PR agency for the sole purpose of product testing. Opinions expressed are my own and are NOT influenced by monetary compensation. 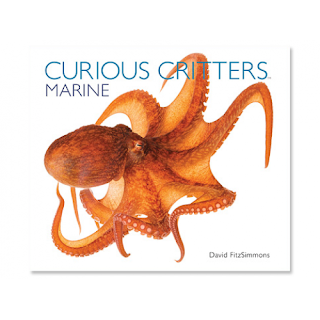 We have been lucky enough to review Curious Critters Volume One and Curious Critters Volume Two in the past....  Now, we have the third volume, Curious Critters Marine by David FitzSimmons.
Broxton was excited to get this book and I absolutely love all of the photos throughout the book!
Read more about it:
FitzSimmons is at the forefront of environmental education. He produces exquisitely-detailed, up-close photography of amazing animals that inhabit the Atlantic and Pacific Oceans, as well as the Gulf of Mexico. Through stunning photography, children go face-to-face with animals ranging from a spectacular spoonbill to an incredible blue lobster, from a tufted puffin to an upside-down jellyfish, and from a baby sea turtle to a giant Pacific octopus.
Adding to the fun photography is playful prose accompanying each critter. As the animals posed for portraits, David imagined them talking to him. Then he wrote down what they had to say.
The cushion sea star, for example, serenades readers with stanzas set to “Twinkle, Twinkle, Little Star.”
Look at me, a bright sea star,
out beyond the big sand bar.
Crawling in the shallow sea,
tiny tube feet carry me
out to join a galaxy
of sea stars that look like me.
A crabby calico crab bemoans his thankless role as a detritivore: “I’m the one down here devouring loads of decaying debris, and nobody applauds my efforts. Without recyclers like me, can you imagine what the ocean would look like? Why, we’d be wallowing in whale waste and covered in crumbling kelp.”﻿

With mesmerizing images and inviting prose, Curious Critters Marine is sure to whet the appetite of young children wishing to know more about North America’s salty waters. Additional material in the back of the book includes a Life-Size Silhouettes page, a Glossary, and a Natural History page, where readers learn that Atlantic horseshoe crabs have blue blood, that tufted puffins may carry up to sixty fish in their beaks at once, and that California sea cucumbers eat with their mouths and their rear ends!

Doesn't this sound great for kids of all ages????