June 14, 2015
FTC Compliant Review Policy:
The product(s) featured in this review were provided free of cost to me by the manufacturer or representing PR agency for the sole purpose of product testing. Opinions expressed are my own and are NOT influenced by monetary compensation.

There are some classics that just never get old. For our house, Tom and Jerry is one of them.  I grew up watching Tom and Jerry, I can remember watching it at Day Care while we all waited for our parents to pick us up. Through the years of watching, I never realized that Tom actually spoke in an episode.  I learned that this week, if you want to know how long that took me to figure out!  Wow.  Talk about being surprised!  (We were watching a marathon on TV and in one episode, he was singing and talking, Broxton and I were both totally shocked!)  Well, now we have a new DVD to add to our collection and I am so excited!  This could also make for a great Fathers Day gift for a little nostalgia for the Daddy in your life! 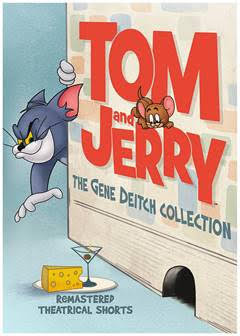 For decades, that tussling twosome Tom and Jerry have chased their way into the funny bones and hearts of moviegoers and television viewers in a variety of unforgettable cartoons. In the 1960s, acclaimed animation director Deitch, was selected to bring a new set of Tom and Jerry shorts to life. Adding his own distinctive style to the famous cartoon, Deitch worked with William L. Snyder’s Prague-based animation studio, Rembrandt Films to create 13 memorable shorts. This entertaining collection from WBHE, brings Deitch’s fun-filled cartoons together for the first time on DVD, completely re-mastered.
Tom and Jerry: The Gene Deitch Collection will include two bonus features; Tom and Jerry…and Gene: The Rembrant Years as well as Much Ado About Tom and Jerry.
“Over the years, there have been many artists who have put their own unique touch on Tom and Jerry cartoons. This collection recognizes the work of long-time animator Gene Deitch, who directed over a dozen shorts,” commented Mary Ellen Thomas, Vice President of Family and Animation Marketing. She added, “We’re delighted to bring these beautifully remastered shorts to collectors. If you are a fan of classic Tom and Jerry shorts or just love animation, this is a must-own DVD for your home entertainment library.”
Originally created by William Hanna and Joseph Barbera, Tom and Jerry centers on the never-ending rivalry between Tom the cat and Jerry the mouse. The plots of each short usually center on Tom’s attempts to capture Jerry. Jerry however, is clever and quick on his feet so Tom hardly ever manages to catch him. The original series is notable for having won the Academy Award® for Best Short Subject: Cartoon seven times.
Academy Award(s)® & Oscar(s)® are registered trademarks and service marks of the Academy of Motion Picture Arts and Sciences.
Featured Shorts:
Enhanced Content:

Are you a Tom and Jerry Fan?  What is a cartoon you grew up watching?
Classic DVD gene deitch collection kids Review Tom and Jerry