September 23, 2013
FTC Compliant Review Policy:
I will be receiving a review copy.   Opinions expressed are my own and are NOT influenced by monetary compensation. 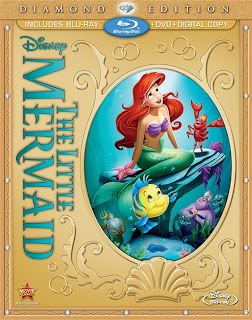 As a redhead, I always had  a special love for Ariel in The Little Mermaid.  I remember my mom even giving me a little Ariel figurine (In my teens) because of us both being redheads!  There is something special about us, I tell you what!
Oh, did I mention that I used to own the Soundtrack?  Yep!  I don't care how old you get...  Nothing better than singing "Kiss the Girl"  or "Part of your World"  Well, having a little boy, I never really thought much about introducing him to this great classic ...
Until the previews have been on television and he stops what he is doing to watch it...

That was when it hit me... He needs... no, he  NEEDS to see this!
He might not care less about Ariel... (since girls are just "girls" right now) but the story?  The whole underwater world?  Yep... I think he is going to LOVE watching this... That is, if he can get over the fact that his mama will be singing right along throughout the whole movie. I know, I should try and contain myself, but I just can not do it!!!!
Get ready... One lucky reader is going to win a copy!  The contest will end on October 1st... The day it is released for purchase...   Go ahead and enter to win!!!  Talk about an AWESOME Christmas gift...  Although we will not be waiting that long here... I will be opening it up the day mine arrives in the mail!


With unforgettable characters, thrilling adventures, soaring Academy Award®-winning music (1989: Best Music, Original Score, and Best Music, Original Song, “Under The Sea”), The Little Mermaid is one of the most celebrated animated films of all time. Now spectacularly transformed for the first time on Blu-ray with digitally restored picture and brilliant high-definition sound! Venture under the sea where Ariel, a free-spirited mermaid princess, longs to be part of the human world. After bravely striking a bargain with Ursula, a sneaky sea witch, Ariel embarks on the adventure of a lifetime. With Flounder and Sebastian at her side, Ariel will need all of her courage and determination to make things right in both her worlds.