December 17, 2012
I recently had the chance to review, Orangutan Diaries.  Given the content, I was interested in seeing it and I figured Broxton would pop in and watch from time to time...
It was a very informational video and although I learned so much, it broke my heart to see them suffering.  If you are interested in learning about Orangutans, or have someone in your family that loves animals... This would be great to watch!! 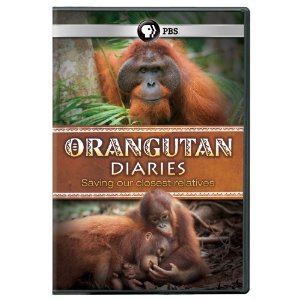 From their press release:
Deep in the Borneo rainforest, a dedicated team of veterinarians and caregivers has a massive and emotional task ahead of them: rescuing and nursing the jungle’s most vulnerable animals back to health. Currently there are approximately 600 orangutans being cared for day and night at the Borneo Orangutan Survival Foundation Centre. Most have had traumatic lives, clinging to survival as rainforests are burned around them, while others are snatched from the wild to be sold as pets. Everyday is a challenge for the team as they care for the orphans and deal with the human crises of life in a rainforest hospital.

“ORANGUTAN DIARIES” features stories of hope as this dedicated team attempts to save these fragile animals. During the course of the film, the team introduces the newest and smallest orangutan, baby Arnold, and races through miles and miles of muddy roads hoping to save a young orangutan held illegally in a tiny crate. Sumanto takes a terrifying fall at the centre and fights for his life, while massive male Hercules, the hairiest orangutan you will ever meet, heads off for his annual leave on a river island.
Lone Droscher Nielson, the centre’s director, is always looking for places where rescued orangutans can be released back into the wild and finally finds a refuge in the heart of Borneo. After months of planning, a handful of rescued orangutans are able to fly away to freedom, including Mama Abut and her baby, found starving on an oil palm plantation but nursed back to health at the centre. Later, the confiscation team sets off on the most demanding rescue yet, with one of the technicians risking his life in a death-defying climb to get Bonny back where she belongs. “ORANGUTAN DIARIES” is an emotional roller coaster ride into the heart of the rainforest that presents an inside look at the lives of these animals on the edge.
FTC Compliant Review Policy: The product(s) featured in this review were provided free of cost to me by the manufacturer or representing PR agency for the sole purpose of product testing. Opinions expressed are my own and are NOT influenced by monetary compensation
DVD education orangutan diaries Review